A medium (29.5 sq m flat, 85-105 kg) Swing Arcus was my second wing, purchased for soaring and . Handling was better than the Santana as was the glide. It was slower than the Santana and noticeably easier to launch. I put about 50 hours on this wing, about 30 of which was motoring. Mine was the first Arcus and Swing is up to the Arcus 5 at this writing so there could be dramatic differences now. 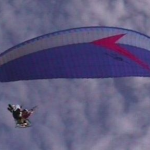 Handling (6): I was light on the glider so it wasn’t very crisp but improved on the Santana.

Inflation (7): Pretty easy. It was large for me, even though I was in the weight range, and so required a heaving tug but it responded appropriately. Smaller wings are always easier to get overhead than larger ones. Try foot launching a tandem glider alone (at 145 pounds) if you ever doubt that!

Efficiency (8): It’s great for soaring in weak conditions or for reducing fuel burn.

Speed (1): This was among the slowest wings I’ve flown for being at the high end of the maker’s weight range which still left me lightly loaded in terms of pounds per square meter. Being made for soaring, its slow speed was good for thermalling while having decent speed while accelerated. It also meant I was almost always the slowest among my flying buddies without being on speedbar. There were no trimmers although motor risers were available that were shorter and had trimmers. They took it out of certification so I never bought them.

Construction (5): Built soundly as far as I could tell. After a year or so I had it inspected and it passed with no issues. The inspection was prompted by a parachutal stall accident that took me by surprise.

Certification & Safety (6): It’s a DHV 1-2 wing intended for beginners (PPG1) or higher. Handling seemed benign in my experience although I’d recommend you fly it heavy to reduce the likelihood of parachutal stall. It’s slightly more prone to parachutal stalls than other wings but mostly because it’s slow and large.

I had two parachutal stall events with an Arcus and 2 other pilots I know have had parachutal stalls with it (all under power). One of mine was while free flying and it recovered from a cascading collapse when I stood up in the harness. Another happened while under power�I hit the ground from that one. I was climbing, barely, through about 70 feet in mid-afternoon conditions. I hit turbulence while holding light brake pressure (about 2) and the wing basically stopped flying. It remained fully inflated as I descended, nearly vertically to the ground under full power. This was before I had ingrained in my head to go “hands up, power off smoothly” in an unknown situation. Make sure you see and rehearse what’s contained in Risk & Reward!

Overall: I sold this one because it was just too slow. Even though I’m not into speed I didn’t like having to be on speedbar all the time to keep up with my flying buddies. It’s great for soaring and overall flying if you don’t mind the speed issue.