The first ever qualifier for 2009’s World Air Games is in the bag. And what an incredibly well-run event it was.

This will also determine the current USPPA National Standing. We don’t know exactly yet because it will have to be sent to Scorekeeper, George Hawkins.

It went extremely well and we didn’t need Sunday for a weather day. Out of many dozens of launches, some in vary challenging conditions, only one was blown and that was because the wind died for a pilot doing a reverse.

There were nine competitors of 11 who registered and paid. All competed and all finished.

Practice turned out to be informal after an afternoon briefing about what was to come. As much as it would have been good to do a dry run, reality got in the way and the organizers had to use the time for getting the course better figured out.

We flew the evening away, practicing and playing with a bit more emphasis on practicing.

I’m a whipped pup. We flew seemingly all day long, ending the morning tasks at almost 2pm. Mostly because it was mellow with no nasty thermals or gusts.

Morning fog delayed the start for almost a couple hours and when it lifted, some strange air made things interesting.

This was a very, very close competition. The difference came down to a few seconds. I’ll have the results up as soon as they are entered and approved. 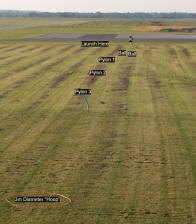 This is the Basket Ball Slalom.

Before coming here, I was practicing the wrong tasks. These are the right ones. I had been practicing the “proposed” tasks,  The final version is totally different. Totally. The “Snake” was fun to fly, but it won’t be used at this event.