The Ozone Viper is among a new breed in high performance reflex technology. Like the Dudek Plasma and Paramania Fusion, it mates an efficient, high aspect ratio wing with a reflexed profile for speed. The Viper is not quite as reflexed as others but achieves nearly the same result. Given the inherently draggy nature of paragliders, fast models must be clean so Ozone spent some engineering effort doing just that. Of course, when fully accelerated, you’ll still need lots of thrust.

I’ve never been a big fan of reflex wing handling, harder inflation and increased fuel consumption. With the advent of the Plasma/Viper/Fusion, that has changed. In fact, I really enjoyed these wings and relish the ability to go fast on Top 80 power with great handling. 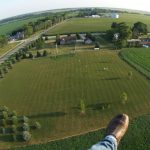 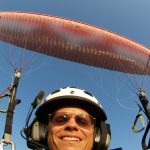 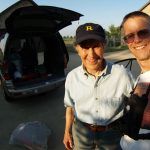 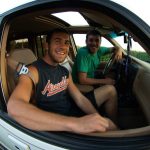 Future pilots in van who stopped by while I was trying out a new wing. 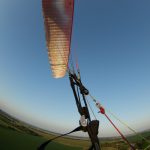 Flights were done both morning and evening on light days. The sink rate tests were done at a temperature of 65�F on a Miniplane Top 80 (55 lbs with fuel) at an inflight weight of 225 lbs. Altitude ranged from 1200 feet to 1500 feet MSL.

This review includes some comparison with the Viper 2-24 since the 20 meter prototype I flew didn’t have many of its features. Those features turned out to be real important. The 20 was more of a Viper 1 without tip steering and with the old-style brake design. The Viper 2 is leaps ahead in handling. It’s semi-reflex has maybe 50-80% the reflex amount as Dudek or Paramania models.

Handling (7): When trimmed slow the Viper Custom is decent but has a noticeable adverse roll. If you weight shift first then brake, you don’t notice it. But if you just pull left brake, your left butt cheek goes up and the glider seems to bank slightly right before turning left. Again, that’s only the Viper Custom, the Viper 2 handles better. You can pull a brake and dive if you want which is what I want in a good-handling glider.

When trimmed fast, these wings are typically flown with tip steering lines since brake pressures are so high and brakes defeat the airfoil’s reflex. The Viper 1 had no tip steering but the Viper 2 did have it and it was very nicely implemented. Not surprisingly, brake pressures while fully accelerated were high.

Brake pressures and tip steering pressures on the Viper 2 are quite light. In precision-type competition flying, you’d probably have the trim set at about two inches out so you could still use full speedbar on straight segments. The manual suggests you can use speedbar while trimmed slow but do so in mellow conditions. To me that means sticking with half-fast trim to safely use the speedbar. After all, in competition type maneuvering it’s almost a given that you’ll be flying through your wake. I did so on my test flight and it handled it just fine.

I didn’t do brake pressure tests because the 20 meter Viper 1 model I motored with would have given unfairly higher readings, much moreso than a Viper 2.

Inflation (-): Reflex gliders as a breed require more effort to inflate. But then small wings are easier since the wing doesn’t oppose your effort so much. I did several no-wind forwards, a light wind forward and a light wind reverse without any problems. You’re running faster but not as much as you’d think. Most of the time I had the trimmers out a couple inches but had no problem inflating with the trims full slow. By the time I was testing the Viper I had put some time on the Plasma and had it pretty much figured out�once you’ve got the technique, they’re quite easy to launch.

In strong wind you’ll love it. Overshooting is less of an issue than regular wings although may be a bit more prone to it than the Plasma. Of course any wing can be made to rocket past an unwary pilot. All reflexed gliders have less tendency to experience a frontal collapse.

Kiting (4): Kiting is so much easier with small wings. Different, for sure, but just easier. Being high aspect ratio presents some extra challenges, though. For example, when it gets off to one side, you can only pull so much brake before the tip stalls and falls back. Kiting is easier with the trimmers neutral since brakes still work well. Its small size means it doesn’t pull quite as hard.

The reflex effect is best seen while kiting. Let the trimmers out and inflate vigorously so that it overflies you some. Instead of front tucking, the trailing edge goes up and the wing descends fully open. Of course you can cause a frontal with enough provocation and if it goes off sideways it will really go quickly. I didn’t get to try both the Plasma and Ozone back to back in strong conditions because the weather was too nice while I had them both. Oh the burdens. But it seems like the Plasma may be a bit more resistant to front tuck at fast trim. I’d welcome other input but will say that the difference seemed very small if any.

It uses cascades, internal bracing and unsheathed top lines to improve efficiency and it shows at the higher speeds. Although my Top 80 barely produced enough power to stay level trimmed fast with full speedbar, I was rocketing fast. And on landing I had an enormous amount of energy.

It’s not as efficient as a similar non-reflexed glider, even trimmed slow, but since it starts with an efficient design to begin with, it’s close.

Note: I would welcome others to do these same tests for verification. Be sure to include your all-up weight (motor, fuel, accessories, you). These numbers seem high and, although I did two tests to help establish consistency, they seem high. To do the test, go to an altitude let off the power and hack a stop watch. At 30 seconds, note the altitude. Subtract the two altitudes and double to get feet per minute.

Speed (9.5): This wing is fast with a really effective speedbar. Not surprisingly it took full power on my Top 80 to barely stay level. The most likely use for fast trim and full speedbar will be coming out of turns unless you’ve got lots of power. The Vipers would be well suited for Cloverleaf type tasks for those who get on the speedbar during rollout. It handled flying through my own wake without problem although I never got a big bump.

Here are the GPS speed readings from 2009-08-13 test. The initial upwind/downwind test to establishes wind speed so as to convert the remaining gps readings to airspeed. MSL altitude was 1200 feet (smooth) through the test.

Here’s where the afterburners lit up. Trim at 0, speed 9 mph; speedbar fully deployed, speed 17. That’s a huge range! Remember, this configuration is not recommended for doing in any turbulence. Instead, go to trims full fast then push speedbar. With Trims fast (11 setting) speed was 14 then, with full speedbar, it was flying 24 mph. Given the average 8 mph headwind, that means an airspeed of  32

Construction (8): It’s built well with strength in all the right places. Chad Bastian, the wing’s owner, had the brake lines adjusted just right so I didn’t have to change anything.

Trimmers were standard, with no markings.

Brake keepers were old-fashioned snaps. They work well and don’t get clogged with iron sand for those california flyers.

Certification & Safety (6): It’s not certified nor would it make much difference in this class since they’re basically competition wings. Skilled sport pilots may like it if they don’t mind the fast launch and landings. We’re flying so heavily that it’s probably not possible to certify but, if you did, it would probably come out as AFNOR Competition, DHV 3, or EN D.

When trimmed fast and hands off, there is decent passive safety in terms of collapse resistance although probably not quite as much as the Plasma. Since I’m a fan of active flying, when big bumps come along, I prefer to trim slow and keep my hands on the brakes. Plus, lets face it, if you do take a collapse while flying at the speed of heat it won’t be pretty. Risk probability low, severity high. I would only recommend this wing to PPG 3 level pilots.

Avoid being trimmed slow and using speedbar, a potentially nasty combination. The practice is common on regular paragliders but not recommended for reflex gliders. This wing does allow speedbar while trimmed slow suggests only doing so in calm air.

Overall: If you wanna go fast with great handling, the Viper 2 is a great glider. I’m torn between the Viper 2 and Plasma, both great selections in this class of high-aspect, responsive reflex gliders. I still have yet to motor the Viper 2 but can actually see owning one of these wings.

Be careful and enjoy.