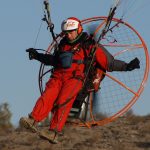 Canadian based RSUltra makes Kangook paramotors among other things. They’ve been building paramotors out of Canada for at least 4 years that I’m aware of and may be longer. I’ll leave you to check out the specifics and will give a cursery review of the machine from my two flights during the Western U.S. Flyings.

Conditions were light wind, near sea level, too cold to fly for long and I weighed probably 150 with my space suit on. Anything below 70°F is under my minimum operating temperature and requires an environmental survival suit. OK, that may be a slight exageration, but hopefully you get the idea: I hate being cold it was unseasonably chilly which helped reduce my flight times.

Weight: The Pollini may a bit heavier than similar displacement but didn’t feel out-of-line.

Starting (-): Early models had problems with their pull starters but that seems to have been addressed nicely. One owner I talked to, who loaned me his machine for the trial, said that the new system is far more robust and he’s had no problem in 50+ flights. I concur—it felt more solid. One thing that feels unusual is how long the pull is and how its geared. A long pull only moves the engine through a few revolutions so it’s easy to pull but doesn’t spin the engine a lot. That makes getting through compression easier.

Ground Handling & Kiting (-): Typical amount of lean-back for a low hook-in but comfy to handle on the ground.

Climbout (-):Good climb rate, no unusual behaviors, I got into the seat by pushing down on the back with one hand. As with nearly all machines, with proper adjustment you can get it so that you don’t even need a hand.

Weight Shift (-) Very good. This is one of the reasons I was really interested in trying this machine because of the new goose-neck bars they employ that uses Miniplane-style geometry which I’ve found to be extremely effective at giving good weight shift while reducing fore-aft tilting. It works, and it works on the Kangook. There was *NO* discernible tilting with power changes — very stable in pitch.

I’m really excited to see this weight shift come to more higher-power machines. It’s nice to have good weight shift withOUT the usual fore-aft tilting endemic of many low hook-in breeds. By putting the pivot point up high enough on both the frame AND swing-arms, they’ve found the best of both worlds—good weight shift without the pitch instability that frequently goes with it. Nice job.

Torque (-): There was a fair amount of torque twist for the power— to the left I believe since the geared motor yaws the pilot right while incurring a left weight-shift effect. It wasn’t as much as higher thrust machines and was quite manageable.

Thrust (-): Good thrust, in the 120 pound range, was well metered through a comfy throttle.

Vibration (-): This engine shines in keeping vibration to a minimum — it’s the smoothest running paramotor engine I’ve flown, tied with the Parajet 160 rotary. Many machines shake my eyeballs at certain RPM’s, this one didn’t even come close.

Safety (-): Average. I worry about the large holes in between cage segments where a stray hand go in the event of unexpected power during start. The prop is well protected with a double hoop, though, so it should resist lines going in fairly well but I doubt it would pass the hand test. I didn’t notice the gas tank clearance.

Construction (-): It seemed well built with weight spared in the necessary places but appropriate strength where it’s required. Cooling should be average. On thing I really like is the three part cage has identical pieces. So if you biff a launch or run over a cage piece, it’s easy to replace. This allows the manufacturer to make only one piece and keep the costs down a bit.

Reparability (-): Typical. You’ll need to weld if something breaks and curves are everywhere. Looks nice but you won’t replace cage parts with tubes from Ace.

Transport (-): The cage pieces dismantle with velcro and pins which seemed easy enough. Having only three speeds the process of complete breakdown but I didn’t see it ready for shipping. Expect to require a bit larger box because the cage pieces are 1/3rd the size rather than 1/4th the size on most other units.

Overall: Very nice for anyone wanting a low hook-in. You’ll love the weight shift and enjoy smooth power. Thanks to Luc Trapanier for letting me demo his unit.