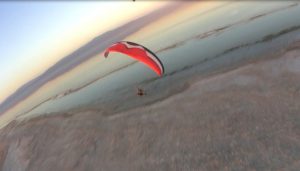 Ozone is a long-time paraglider maker that is pressing harder into paramotoring with several models targeted at powered flight. The Viper 1 – 18m is a special wing made for their sponsored pilots to compete with and I was lucky enough to get my hands on Emilia Plak’s and Chad Bastian’s. The Ozone has a less pronounced reflex profile so you can more safely use brakes while trimmed fast although NOT while trimmed fast and fully accelerated. This wing is intended primarily for competition pilots but in the hands of any decent PPG 3 pilot who flies smaller wings it would be quite manageable. Sadly, it’s apparently not sold to the public. I review it here for completeness — thanks to Mathieu, Chad,  and Emilia Plak for letting me take several rides on this wing.

On an unrelated note, we had several filming sessions including one incredible romp along the beach. Suffice it to say I’ve never been that close to a human in flight who wasn’t my copilot. You’re gonna love the section on formation flying when video 3 finally comes out!

It’s extremely fast. When I needed to do some filming of Mathieu and Emilia, flying the Viper 18 let me keep up. It is the same ride that took Mathieu to an impressive 44 second time on the cloverleaf. Of course the cloverleaf is every bit as much about pilot skill as wing capability but you must start with the right tools. And actually a slower wing on the cloverleaf that has a greater speed range might be better because there’s very little time in level flight where the high top speed can bear on overall time.

I was flying a Blackhawk Pro Series paramotor at sea level for the speed tests. I weighed probably 145 with including cold-weather garb and the motor was about 70 pounds as flown (including fuel). I also flew it with my Black Devil Blackhawk and a Pap 125. 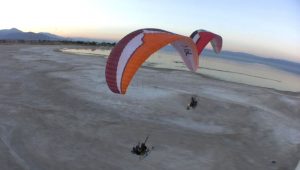 Handling: Trim in handling is moderately heavy but effective as you would expect of a smallish wing. It dives and will stay in the dive with a long pitch-up that is great for building speed but must obviously be managed when low to the ground. This is an advantage for experienced pilots who are used to managing energy but could be a deadly trait for newer pilots. Pull in a handful of brake and you’ll find yourself looking at the ground. The smaller the wing, the more pronounced this trait–wing loading is more the cause than wing brand. Just look at skydivers on their tiny wings.

Trim out handling is quite heavy using the brakes but there are tip steering toggles that are extremely effective — more so than a previous Ozone model I flew. They are positioned so that you can easily hold a brake toggle AND the tip steering toggle. Use the tip steering when trimmed fast with the speedbar pushed out. You won’t control pitch much but will be very responsive in turn.

Inflation: Like any small wing it pops up quickly, requires dampening, and will definitely require brakes to lift off, especially in no wind. I launched with the trimmers about halfway out.

Efficiency: Did not do a since rate test but it was easy to slow down up high, let off the brakes, dive, then do a long foot-drag with the excess energy. This is more effective when trimmed fast. Man is that fun! Just don’t screw it up because your initial descent rate will be bone-breaking fast.

Speed: Fast! Here is where this thing shines. Remember that I normally fly a downsized beginner wing (18 meter Pluto). It’s a blast to fly, solid as can be, but is not particularly fast. That’s why I need an addition and this speeder clocked in at 42 mph–the fastest airspeed I’ve yet recorded on a paraglider. This was at sea level where you get no advantage from high density altitude, either. The Plasma 22 was close and, had it been this size it would have probably been faster, but they don’t make it that way so this Ozone gets the nod. Right now, if I were to buy a fast wing and this was available, it would be my top contender.

One Caveat is that the biggest speed increase comes through trimmer use. For competition it would be handier if that came with speedbar use (no wing can do that). To be able to go from 25 mph to 42 mph on speedbar alone would be incredibly handy on a longish pylon course or even a windy cloverleaf.

To see how fast you would be at your weight, see the formula here. My all up weight was 207 pounds.

2013-12-31 Update. After buying and flying this wing for several years I thought it might be interesting to repeat the speed test. It is likely my D’s have shrunk slowing the wing down plus, this was my own wing so it was a different instance than the one I flew for the original test. This is what I found, flying it at Pine Island, 300 feet ASL, 74 deg F, in fairly smooth conditions at an all-up weight of 142+60+12=224 lbs. I was unable o get full speedbar due to an adjustment issue on my machine’s speedbar that I had just updated.

Construction (-): I didn’t look it over very carefully but Ozone enjoys a very good reputation and what I saw seemed well built.  2013-12-31 Update: The wing has held up extremely well over the last two+ years of use.

Certification & Safety (-): You’re a test pilot. Like all reflex wings (and all wings, really) there are some dark corners that must be minded. And this one will never be certified mostly because of it’s small size. There’s just no point in going through the expense for wings this small ² — after all, how many 130 pound pilots are there?!?

Overall (-): If you can get one, want to go fast, don’t mind heavyish handling on the regular brakes, and are into competition-type flying, you’ll love this glider. You’ll especially appreciate going fast without having to use the speedbar but, if you want to push out all the stops, look out! The speed RANGE on this glider is truly impressive.