This is the first year with a new layout at the Ultralight area. Everybody agrees: it’s nicer and there was a better turnout. Paul Czarnecki of PlanetPPG has the only paramotor tent and does a pretty thriving business, at least in terms of highly qualified prospects. He was also the first Ultralight, that I’m aware of, to be allowed to tandem there. He has become quite the prolific tandem master.

Tim and I are on our first real cruise aboard Enterprise C and we’re lovin’ it. Among other things, it rides exceptionally nice in back (where I’m writing this from). I can write, edit, draw, animate, etc. much easier. Getting 17 mpg rocks, too.

We arrived Tue night but got to Sun-N-Fun just in time for the evening brief. It’s really cool that Paul is doing the briefings and that they’re very accommodating. Actually, they were good to everybody. Lots of restrictions have good reason, like having airplanes fly overhead at 500 feet. They’re not supposed to but sometimes it happens, ergo a 400 foot ceiling.

Lots of cool stuff to see but we rushed around the rest of the event, spending most of the time down in the ultralight area. Eric Farewell was doing work for his Aviator YouTube channel but stopped in for a while.

Wed was good flying with 4 of us taking wing. I did some stills and video but had to keep more distance than normal. It’s part and parcel of big events like this that, if you’re not part of the show, you fly really mellow. Don’t do anything that even looks abnormal. We were allowed, however to do footdrags down the runway and even “discretely” do little slaloms of the runway edge cones. Gotta hand it to them for that. Thanks to all the volunteers.

Thursday morning sucked. Briskly moving low scattered clouds told of high winds to come. I wound up being the wind-test-dummy and indeed it was sporty. Even up high I didn’t like it so, after 2 patterns I packed it in. They closed it down anyway due to turbulence in the L.Z. It wasn’t that it was dangerous, it just wasn’t fun. It still wasn’t as rough as then when Eric D. and I flew together in some strong winds at Palm Bay.

That was it for flying so we toured the other aviation areas and I successfully avoided buying airplane or helicopter stuff.  Feeding those beasts puts the cost of paramotor in fine light.

Tim and I headed out against the howling winds to Lakeland’s Parker Lake. Some fun and some usefulness; blading, taxes, writing, editing, etc.). Tonight or Tomorrow morning we’ll be doing some filming with Eric Dufour. Also may fly again with Eric Farewell at some point if his time allows. He has some gorgeous sites that would look good on the Airspace video.

Thanks for the great time. At least Lakeland knows how to welcome flyers. It was great seeing everybody. 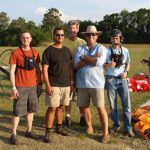