A Student’s Perspective On Radios (And Making A Mic Work) 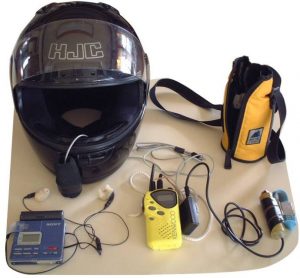 Glen Boyd purchased his PPG helmet, including a push-to-talk (PTT) in 2004. He offered up this humorous treatment of radio use during his training. It was funny enough to land in “Entertainment but is sufficiently informative to include in reviews. He wrote:

The helmet cable ended in two plugs: headset and microphone. Not surprisingly, the radios my instructors used had two sockets into which those plugs fit nicely, thank you very much. The microphone connection was superfluous in those days since there was little opportunity to “Roger that” and “Got ’em visual”ï¿½all that neat new pilot vocabulary. Rather, pre-take-off radio protocol briefings were indeed brief: “Shut up! Don’t think! Do what I tell ya!” My “landing gear” often became so spongy while aloft from “kick your legs” directivesï¿½with the subsequent belly landings ï¿½that the foam trucks were mobilizing every time I turned base.

At long and at last I was part of a Fly-In: one of a dozen pilots in the air. Freedom! Bliss! Like being in a house of ill-repute with a stolen credit card (or do they strictly insist upon cash?). Trouble was, finally I wanted to hear a friendly voice in my headset. Small problem: I don’t have a radio.

An office tech, who knows more about everything than anybody out to, condescended that “FRS/GMRS” are available anywhere. I go “somewhere” (how does one go “anywhere”?) and explain that I need a radio that can be connected to an external transmit/receive device. Naturally, all I ever wanted out of life is not in stock. I order it and it arrives the next week. Small problem: there’s only one transmit/receive port and I need two holes to bung. No, there’s no “Y-cable” that can connect your two to our one. OK, I’m returning itï¿½please show a “credit” on my charge card.

Solution (right or wrong): Some radio external ports are proprietaryï¿½a plug can’t be had for love nor money. Buy a radio that includes a boom microphone. Cut its wire well above the plug, save this end and do whatever makes you happy with the other piece. Shouldn’t be any problem getting sockets for your helmet plugs. Make a “Y-cable” with the excised boom wire and plug, and the generic sockets.