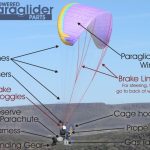 Basic parts of a powered paraglider

Ten minutes after putting your car in park, everything is ready. It’s just you perfect air, at the perfect place, ready to fly. Lay it out, ready yourself, throttle up, and start to run. The wing springs to life, spreading into a wing and comes overhead. You squeeze into full power, take a few more steps, and run into the sky, finessing brake controls to head for the where of your whims.

It’s a nearly unobstructed view with less imposing structure than any other powered aircraft. With experience, a pilot can control the flight path within inches of his or her desire.

Many pilots enjoy just tooling around to enjoy the sights while others enjoy carving up the sky and thrilling to the fine control. The same wing that is used for powered paragliding (PPG) can be used for soaring, just like sailplane pilots.

Lets start with the basics, it:

What is a Powered Paraglider? 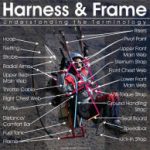 Paragliding is the simplest form of flight: no plane, no windows, minimal frame—just you in control, flying through the air. It launches from a field, is easy to fly, to transport, and is inherently stable but offers amazingly precise control. The paraglider itself has no rigid structure—the pilot sits in a seat, suspended by lines. The paramotor, a backpack power unit that attaches to the harness, provides thrust for climb and flying level at your own will.

It is not a parasail or powered parachute which use very stable, but far less efficient wings.

The motor does most of the work. Although you must be able to walk around and handle its weight you certainly don’t have to be an athlete. Numerous pilots continue flying into their 70’s and others have started as young as 14 years old. Once in flight, the wing is carrying all the weight.

License, The Law, & Where You Can Fly

No license is required although training is incredibly important. PPG’s are minimally regulated under the Federal Aviation Administration’s Part 103. Essentially we can fly during daytime in wide-open areas. We must avoid congested areas, busier airports and a few other locales.

Private open fields, some airports, and a few parks are great places to fly. One beauty of the sport is that we don’t need an airport! Most state and national parks are off-limits to launch but do allow overflight.

There are many groups of pilots who have established local flying sites where you can launch. Courtesy of neighbors is important to minimize complaints. 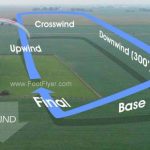 Ask just about any pilot if they’re afraid of climbing ladders and the answer will be yes. Human nature is to be afraid of heights, a healthy response to obvious risk. Everybody starts with that fear and, after a few flights, it is essentially gone. Once you internalize how secure the harness and wing is, there becomes nothing to fear.
Training

Different courses are available, but be very careful to pick a qualified, certified instructor with an organized program. Make sure they use the USPPA syllabus or equivalent and have thorough emergency training including simulator rehearsal. Make sure that, if towing is used, USPPA tow guidelines are followed. Solo pilot certification is available for student (PPG1), pilot (PPG2) and advanced pilot (PPG3) levels through the USPPA/USUA. Visit www.USPPA.org for a list of schools and instructors.

You can reasonably expect to have your first flight (achieve the PPG1) in 3 days but are far from ready to be considered a pilot (PPG2). Accelerated courses, which take significant extra precautions, can get someone a flight on their first or second day. Expect 5 to 8 days to earn a PPG2 rating.

What Weather Can It Handle?

This is a light-wind sport. Generally a maximum wind of 12 mph is acceptable although, under certain conditions, experienced pilots can fly in stronger winds. We generally fly in the mornings and evenings so as to avoid the bumpy mid-day air. A few pilots seek out those mid-day conditions at the expense of some added risk.

Powered paragliding is probably the safest form of recreational aviation ever devised. Get good instruction, pay close attention during training and respect the propeller to minimize most of the risk. Like any recreation with humans in motion, there is risk. Training and the first few hours of flight are the most critical. We estimate the overall risk is less than motorcycle riding or free flying (paragliding with no motor) or flying small airplanes but more than driving a car.

Of the minimal risk, most comes from pilot error, not equipment malfunction. A conscientious pilot with the right attitude and good instruction can make this sport incredibly safe.

What if the motor quits?

It’s a glider, and glide it will!

Conscientious pilots stay over landable terrain at all times which is real easy in a craft that lands at 9 mph. From 500 feet you can glide well over a half mile. With minimal control input you’ll coast downward about 3 mph as you glide forward at about 20 mph. You can land in a space smaller than the average yard so a motor failure is rarely more than an inconvenience.

In all the accident reports I’ve seen, there has never been a fatality that resulted from a motor failure although there have been injuries when pilot disregarded flying over safe terrain.

How do I Choose a Motor?

Nearly all experts recommend choosing an instructor, not gear, when you first get started. Do ask about cage safety: ask how well the cage protects you hands (see A better Paramotor), a leading cause of pilot injury.

Your success is far more dependant on good training than what type of equipment you buy. The instructor will know your tradeoffs because it depends on quite a few things: how you plan on traveling with it, what elevation you’ll be flying from, how much you weigh and others. Heavy pilots will require more power but lighter pilots will struggle with heavy gear regardless of power.

Besides, as a new pilot, you won’t know the difference. Most pilots stay with the style of motor they learn on which suggests that there really is no “best.”

How do I Choose an Instructor? (see more about this)

Start with finding one that is USPPA/USUA certified. They have shown skill and knowledge in the most important area: powered paragliding. Those certified by other orgs or not certified at all may be good but it’s up to you to find out. Plus, make sure to ask to use the USPPA/USUA syllabus—unfortunately that’s not required but is your best guarantee that you’re learning what you need. Any USPPA/USUA instructor has access to the syllabus.

Flying Without the Motor (Free Flight)

Paragliding, or free flying, can be done using your same wing with a different harness. You need mountainous areas, ridges or a towing operation but being towing is dangerous beyond appearances. Never, ever try towing without using proper equipment and certified tow operations.

Free flyers use natural energy in the form of rising air they call lift to stay up. That means rising air from warm ground or air that is deflected upwards over hills.

Can I take people up?

The simple regulation we operate under is intended for solo operations. However, recognizing the value of two-place (tandem) training, an exception is made for instruction using two-place craft. The instructor must be qualified under a special program run by an organization allowed to do so by the FAA such as USUA.

Tandem operations require significant knowledge and skill to operate safely since you must manage the motor, wing and another person at the same time. Many instructors use a wheel-equipped machine to make it easier.

Does Any Machine Eliminate Torque?

Very few. They must eaither have highly offset thrust from the riser’s center or use vanes on the cage to counter torque.

People like Dell Schanze (see more about him here) will tell prospects such utter nonsense with great conviction. Neither I, nor any other experienced paramotor pilot I know, have flown a high power machine without offset or vanes that eliminates the effects of torque. And certainly the one he promotes does not do so.

An enormous amount of torque effects depend on setup. ANY paramotor can be rendered unflyable due to torque effects if not properly adjusted, even on small motors (80cc). But no amount of setup will eliminate torque effects on high power machines, particularly those that lean back a fair amount. See harness Issues here.