About the Author: Jeff Goin 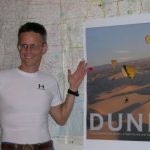 The long and winding road to writing a book

Ever since I’ve been able, I’ve enjoyed finding solutions to problems rather than just complaining about them. If something had room for improvement, I would rather suggest or build the solution than whine about its existence.

My first two years of flying were powerless. From a propulsive perspective, that is–I learned and flew sailplanes. Mastering thermalling was a matter of necessity if I wanted to stay airborne and believe me, I wanted to stay airborne. Whenever I could get myself to the gliderport outside of weekends, there was no time limit on the club gliders and many flights exceeded 4 hours. As a 14 and 15 year old air nut, this was heaven above earth.

As age allowed I got my private glider, then airplane, then commercial, and finally flight instructor (CFII ME) certifications. My first paid job was teaching and that was surprisingly enjoyable. It was fun figuring out ways to light the bulb of understanding in a struggling student. As you can imagine, some were easy, some were challenging and a very, very few were out of their element enough to encourage them into another hobby or another instructor. 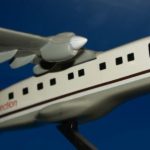 In college, a friend who worked for a local hotel did the nightly “audit,” an arduous tasked aided by a little Apple II computer. He chugged through the steps with its awkward interface and barely usable output.

My newfound hobby (supplementing R/C airplane teaching) was programming; a transformation that sprung from a required programming class. So I wrote my friend a new program with far more flexibility than their existing one and showed it to him. He loved it and started using it – a very satisfying affair. Eventually the hotel bought my “Rooms Manager” (for a whopping $200) which was quite cool given that it was a hobby.

Out of college and into my first commuter airline job in 1986 (that was the berries, they were paying me to fly!), I became friends with the dispatcher/scheduler (we had 4 airplanes). At some point, while hanging around, I watched as he built the pilot schedule manually. I offered to write a program that would make his job much easier; it was fun for me and quite useful. He liked it. His boss liked it. They wound up using it a lot and I continued to improve it.  Eventually that software morphed into a crew scheduling, tracking, training and payroll system that I wound up selling (leasing actually) to them and other airlines. It was fun and the income eased an otherwise abysmal paycheck as a commuter airline captain.

When that company started growing and adding airplanes, their “seat blocking” system was limiting and difficult to upkeep. So I suggested a solution and showed them how it would work. They said “do it” and the EasyLoader software was born. I wound up selling that too to other airlines.

Eventually, after a couple airline bankruptcies, I landed on my feet at an excellent company and, in a bit under four years, upgraded to captain.

Around that time the software business was getting to be a chore. I didn’t really need the income, the upkeep would increase dramatically (porting it to Windows) and I was already weighted down with it. So I got out, easing my customers into other products as they needed.

That left a lot of creative juice looking for a place to pour. 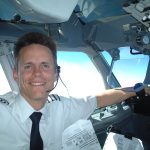 The voice communications currently used in commercial aviation (and nearly all other aviation) is an outdated travesty. I’d thought for several years of how to improve it but now had the time to spend coming up with something. Armed with that, I spent probably 60 hours over a couple months developing a proposal for “Voiceless Communications”. It was nothing completely new, no new technologies, no new concepts, but I wanted to offer up my solution, to feel I did my part. After all, the worst aviation disaster ever (two 747’s colliding in the Canary Islands) would have been prevented with such a system. So I drew up controller’s consoles, airplane interfaces and procedures then came up with some methods to implement them. I sent the whole affair off to the FAA, NTSB and two other organizations. They gave me the courtesy of a reply that “they are working on it.” OK, I did my part.

A year or so later, it became apparent that the way pilots copied arrival/departure weather was error prone. Everybody copied it differently and put things in different places. If they didn’t delineate, the temperature/dewpoint could easily be mistaken for the altimeter setting, among other things. The non-standard formatting lent itself to errors and, I felt, incurred some loss of safety. I’d seen other forms before (that individual pilots used) and thought that standardizing on a form would be a great idea. So I devised one that would help standardization, be easy to use in low light and reduce the likelihood of errors.

After upgrading to Captain (and now doing all the taxiing) I took new notice of the taxiway diagrams we use to get around on the ground. I felt these “10-9” pages unnecessarily difficult to quickly identify taxiways. The example at Fort Lauderdale was (and is) the worst. But instead of complaining about it, I imported the diagram into a drawing program, revamped the diagram and made it far more readable. Then I wrote a letter with my suggestion, included my example and why I felt it would improve safety. Unfortunately, they never even replied.

That effort isn’t over but it will have to wait because, at about the same time, in 1999, I was introduced to powered paragliding. See the Airline Safety Section here. 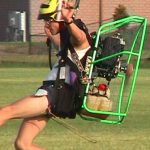 It turned into a burning passion, to be able to fly around legally like a bird so completely caught my fancy that it engulfed my time. When I wasn’t flying it, I was thinking about it, writing about it on newsgroups and finding new ways to enjoy it. I wanted to preserve it, to promote it, to make sure it thrived enough to continue, to have a voice.

Sometime in 2000 the NAPPG came into being and I joined enthusiastically. But it didn’t take hold, never getting to the point of being a democratic organization. That was a primary goal, that whatever formed should be accountable to a group of people.

By Feb of 2001, after much consideration, it was time. Several others and I formed the United States Powered Paragliding Association. In the years since it has developed information on the web site, brochures, educational material and worked with the government and other organizations in the promotion of the sport. It has responded to countless queries about the sport, helped pilots in trouble with the FAA, helped organize events and now includes shared magazine content in Powered Sport Flying. Most recently the USPPA has added enormous web capability to serve its online members and continues to represent the sport to the USHGA and the FAA. It has also worked hard to get liability insurance which will now hopefully be done by the USHGA.

One of the organization’s initiatives was developing a syllabus for new and existing instructors to use. Something that would help them guide students through a methodical, thorough training process; one that insured coverage and limited the instructor’s liability.  Many schools had contributed information to it but it was languishing. Then a training accident happened. For whatever reason, that motivated me to get the training syllabus done and out, which I did.

While researching it more, I asked schools about training manuals were being used for students. The only material was either a translation or geared towards free flight and most schools didn’t even use it. There was nothing that offered a comprehensive manual for the US PPG pilot in the way that they typically learn. So I asked a respected author who I had hoped was writing such a book on PPG. It turned he wasn’t. He started but then other projects got in the way and he decided against it. But it did offer that if I wrote one, he would publish it.

And that, my friends, is how I got to this point!

My biggest value on this book is not creating the ideas, it is putting them together in one, easy to understand place. Coalescing several years of observation from the sport’s most prolific instructors and getting technical expertise from its most knowledgeable participants, many of whom have contributed greatly to the effort. Much of what this book does is separate the B.S. from the BS.

It shows instead of tells, gives easy to read examples instead of esoteric descriptions. My goal with this book is to fill the hole of knowledge that has, so far, resisted filling in such form and to do so  in an educational, colorful and easy-reading style that will reach wannabe’s newbies, old hats and even instructors in this sport. 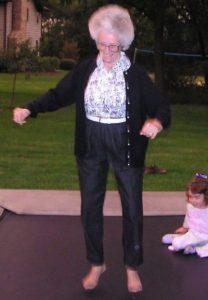 on trampoline). Even so, she gave her relentless–probably obnoxious–13 year old son a chance.

After telling me who to call, she eventually gave in and even joined my quest for flight—a quest that started with the Central Ohio Soaring Association in Marion, Ohio.

I was 14 years and one week old when I soloed the glider. It was too windy on my birthday which accounts for the additional week.

I managed to get my private license at 17 followed by the rest of my pilot ratings during college and the year after.

Kevin Detray was kind (and desperate) enough to become my first aviation employer where I earned my first dollar flying—a milestone. Milo Churchin, my first student, was almost my last but that’s a story for another time.

My flying career took me through numerous other jobs including Skylane pilot for a pew padding company, two commuter airlines (both out of business now), a barely major airline (also out of business) and finally to Southwest Airlines—thankfully, still in business as I write this.

Such was my path to paying for what became an overriding passion: paragliding and paramotoring.

After learning from Instructors Jeff Williamson, Mark Sorenson, and Alan Chuculate, I took to the wing like no other endeavor.

At my first major gathering of PPG pilots, the American Flyer event in Albuquerque, the tone was set. I met some of Powered Paragliding’s best and most dedicated pilots. Seeing Eric Dufour casually prance from tire to tire with incredible accuracy sparked an interest in precision flying that eventually led me to competition.

The Powered Paragliding Bible is a culmination of what has been learned over the years from a variety of instructors. They have  developed effective techniques both for flying and for teaching.

It is my passion to see the sport thrive and its pilots excel. Not everyone will aspire to win competitions but hopefully the book and this site will help pilots realize their own dreams, even if that’s just succeeding at the ever-challenging no-wind launch!