I plan on selling two of my competition wings, A 2016 Doberman 19 and a 2012 Viper 18, but that got me thinking, who would I sell them to? And is flying them more dangerous? Do they take more skill?

It’s complicated, but the short answer is “no” with some very important caveats.

It’s not a big deal for an average pilot to fly a “competition” wing in the 10 – 12 lbs per m² range as long as he doesn’t push it. That means being willing to drive a race car like a really nice-handling family sedan: no speedbar, especially if it has a speedbar-trimmer interconnect (STI), like the Doberman, and at no more than half trim.

What Makes it a Competition Wing

Each type of competition favors its own wing. If you’re loving on long cross countries, then you’ll look for efficiency at high speed since headwinds can play such havoc with distance. All the better if the wing can get really low loitering fuel burn which maximizes range in a strong tailwind.

Pylon racers want speed and a broad speed range. Efficiency is secondary since they generally don’t mind fuel weight and don’t fly for long anyway. Going around a pylon is best at a slow wing speed with the body whipping around. Then on level out they convert that swinging body mass back to wing speed using speedbar. And they want that speed range in the speedbar since mucking about with trimmers is ill-advised in that moment. 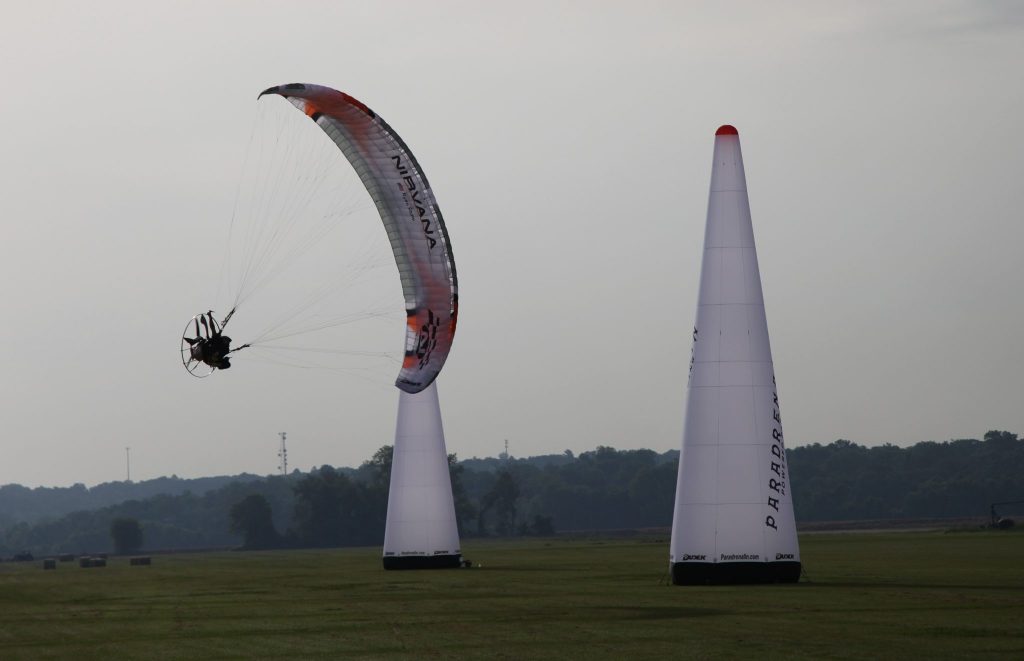 Competitors in “Traditional” competitions want something that’s in between since precision and efficiency tasks must be flown on the same wing.

But the wing that this article focuses on is Pylon racing because that’s the most specialized.

You would be forgiven for asking why pylon racers seem to favor high aspect-ratio wings. After all, efficiency isn’t seemingly as important. I suspect it goes something like this.

If the wing has less drag and more lift, it can be smaller—that means faster. And you don’t have to go very far on YouTube before seeing these small, skinny wings balling up in pylon races when they go through their own wake. Big zero points there.

They’re nearly all reflex wings to some degree and one thing reflex models don’t like is being at speed, unloaded, and having regular brakes pulled. That pisses them off.

Plus, the act of rolling out of a bank means the up-moving wing tip is experiencing slightly decreased angle of attack (AoA) while the down-moving tip is experiencing slightly increased AoA. To visualize what’s going on, put your arms out like wings. Bank right. Notice the air is hitting your left hand from ABOVE (Decreased AoA), something paragliders don’t like. More wingspan, more effect. So long skinny wings (high aspect ratio) are worse.

Another aspect of these wings is that they spin easily. More accurately the trailing edge of a heavily pulled side deforms aft. I’ve hit the beginnings of a spin many times but, just as a feel it start, I let up. If I wasn’t sensitive to that happening I might not be walking anymore. It has happened most of the time while slowing and turning for spot landings which has always been one of my better tasks in competition. It might actually be good in one way: I may get the feel of a deformation (softish brakes, unusual twist) before it erupts into an actual spin.

So are they Dangerous?

Is normal-sped driving a of street-legal race car down the highway dangerous? No. But a new driver trying to extract max performance out of that car would be immensely more dangerous.

Likewise, competition wings are only more dangerous when their capability is engaged. Even the expert competitor faces more risk on the wing, but a weekend flying trying to fly that wing at its max ability is nearly doomed. Using speedbar at the wrong time, or pulling main brakes at the wrong time can be catastrophic. High speed collapses aren’t forgiving.

One more area where they are a bit more risky, owing to the long, skinny planform, is that collapses can get more cravaty, where fabric gets folded up in a draggy way that can erupt into a plummeting dive. Plus they’re more reactive in turbulence, darting forward more in gusts than beginner models.

A highly experienced pilot with developed reactions appears to be only marginally more at risk on these wings. There’s a huge difference in collapse resistance when they’re flown by someone with the fast reactions that come with many hours of responding to turbulence.

If you fly a normally loaded competition wing on a reasonably mellow day without speedbar and no more than half trim I’ll bet risk is not much different. They handle nicely. Inflation may be weird, especially with small cell openings, in no wind situations.

Why no more than half trim? After all, reflex wings, when flown according to their manuals, are indeed LESS collapsible at high speeds. But their manuals warn against using main brakes at full speed. In fact, most modern performance paragliders are like that. Look up the current high-end freeflight racers and you’ll find they have rear-riser steering handles accelerated flight. That’s telling.

So yes, you can fly it. You can buy my wing but I’ll ask you to sign a statement that you read this article, and acknowledge the higher risk of 1) an uncertified wing, 2) higher aspect-ratio, 3) higher wing loadings, and 4) flying accelerated.