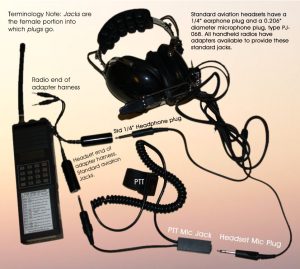 There are over a dozen aviation radios on the market and the beauty is, if your headset or helmet uses the standard aviation plugs, it will probably work all aviation radios as described below. If it uses a proprietary plug then it will only work with that one radio.

Sept 19, 2007 There are two standard jacks for aviation, one for earphone (pictured far left) and another for mic. Aviation standards specify that the mic jack provide a small voltage for “phantom” power. Aviation microphones require and expect this power to be present.

Since hand held radios are too small to accommodate these sizes, they come with proprietary jacks. But in order to accept the wide variety of aviation standard headsets, they offer an adaptor that plugs into their proprietary jack and terminates in standard aviation jacks. Handy, but bulky.

My first helmet, a Comtronics, was purpose built to work with an aviation radio. I had to order it that way then Nick Scholtes created an adaptor that allowed it to also work with FRS. That adapter required some simple (according to Nick) electronics to let them play well together.

After that helmet was donated to some unknown individual at a paramotor event (I left it behind accidentally) I decided that, on those occasions when I used aviation radios, I would wear my standard aviation headset. Stan Albright, a Chicago area instructor, does the same thing except that he carved out a hockey helmet to fit his headset to give him some protection. That’s a cheap solution, too, since the hockey helmet is less than $40 and aviation headsets can be had for $150.

King Avionics dominated aircraft navigation and communications for years and, when they introduced their handheld in the 90’s, it became a decent seller. Other makers, however, made much smaller units with the same features and they eventually took over the market.

This is the radio I fly with the most when I need aviation communications because it has very good transmit and receive quality for the controllers I talk to. I’ve yet to do a comparison of the radios in flight. That would be revealing. Unfortunately, it’s also the bulkiest, measuring nearly a foot high.

The KX-99 is the easiest to use. I didn’t have to read the manual to start using it right out of the box whereas my other smaller models seem more cryptic. Once you learn their method of operation it’s no problem.

I’ve seen the results of talented engineers who make their wares quickly usable. It’s not easy but the best products require no look at a manual except for more advanced features. King accomplished that.