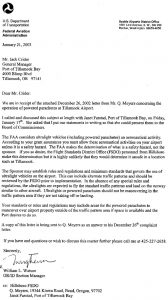 When Airport Managers Don’t Want Us by Scott Adair | Banning at Marion, OH?

No if they are private and the owner says so, Yes if they have accepted federal grant money but with caveats.

Google “faa airport grant assurances” to find the cleverly named Airport Sponsor Assurances – Federal Aviation Administration. Open the PDF and you’ll find a list of 39 requirements in Part C that includes #22 Economic Nondiscrimination. As of Jan 2016 it was here as a PDF.

They Have to Let Me Fly, Then?

It’s not that easy.

C.22.i. The sponsor may prohibit or limit any given type, kind or class of aeronautical use of the airport if such action is necessary for the safe operation of the airport or necessary to serve the civil aviation needs of the public.

They can restrict an operation if they feel it would be unsafe. That’s why you won’t get permission to paramotor from Atlanta Hartsfield. But the FAA has clarified in the letter at right that it’s UP TO THE FAA to decide what is safe.

If an airport wants restrict an activity they must get the FAA to deem the activity unsafe. An airport manager can’t just arbitrarily determine your legal activity is unsafe.

What they *CAN* do is make it difficult. For example, they are not obligated to let you camp on the airport. Moreover they can call the cops and have you removed then let the courts deal with it. If you sue, you will win but the immediate effect is the same, you’ll not be flying there.

If you’re using an airport, be educated on how they work. As addressed above, they usually can’t call our operations a safety risk unless the FAA agrees. Lets not give them reason to try.

If you’re an airplane pilot or PPG 2 rated PPG pilot, you should already know enough to operate safety from airports. If your knowledge is rusty, though, find a knowledgeable instructor/pilot to brush up and clarify things.

The letter at the right was sent to an airport administer by the FAA. The following was based on a letter by Scott Adair which was spot on

Over the years, I’ve had discussions with various pilots who experienced problems with certain Municipal Airports under the premise that PPGs are not allowed to fly there or even purchase fuel there. I’m not speaking about privately owned airports which have the right to discriminate nor am I speaking about larger towered airports which we avoid anyway. It’s the non-towered airport that is typically a desirable place to launch and land, and near enough to some rural flying areas.

The attached letter from the FAA has some age to it but sets a precedent where any airport that receives federal funding cannot discriminate against ultralights and other “aeronautical activity”, or they are at risk of losing their funding. Municipal airport are usually federally funded, meaning ultralights have a right to fly there. Note that the airport may have certain requirements, such as “an aviation radio must be used at all times”, but use of the airport cannot be legitimately denied. Even radio requirements are sketchy. Lots of vintage aircraft (think the plethora of J3 Cubs) have no radios. Ask if they prohibit those aircraft.

How About Buying Gas?

It is my belief that the purchasing of AvGas is an “aeronautical activity” incidental to aviation operations which should not be denied under this same ruling. While it is unreasonable for the airport to expect the PPG craft itself to be fueled on the spot, due to the small size of the tank and the odd amount of fuel present in the tank requiring a difficult estimate of oil mixture for safe operation of the motor, I have found a portable 5 gallon tank, properly labeled “for aircraft use only”, is reasonably acceptable for our ultralight aviation activities to have the precise oil mixture. Some airports may require their staff to operate the fuel pump and others may have a self service or supervised approach inside airport property.

Most small airports have been very reasonable, in my experience, and appreciate ultralights as a manner to promote aviation within the community. I have encountered some that have been resistive but I have found talking to them in person is better than on the phone, to get “local knowledge” about procedures, location for launch & landing such as a grass area away from the paved runway, and method of airport access in the early morning hours. Some will allow the purchase of a gate card, typically in the $25 range, for secured access to the premises. And a face to face conversation lets the airport manager get to know you and see that your intentions are good and you want to fit in with the aviation community.

If the dialog between the ultralight pilot and airport manager or FBO (fixed base operator) is kept unemotional, non-argumentative, and logical for the purpose of finding the best location to launch, get up, and get out safely without causing issues with other aviators, then all parties can be satisfied with the arrangements. This letter is best used as reference (not leverage), perhaps just to have the confidence to approach the airport manager/FBO, but more so to help find solutions and procedures on the best way the physically smaller PPG can co-exist with General Aviation in a safe manner.

2016-01-11 Of the 40 or so items that grant recipients agree to when they accept federal money, this is the most interesting

b. In any agreement, contract, lease, or other arrangement under which a right or privilege at the airport is granted to any person, firm, or corporation to conduct or Airport Sponsor Assurances 3/2014 Page 11 of 20 to engage in any aeronautical activity for furnishing services to the public at the airport, the sponsor will insert and enforce provisions requiring the contractor to-
1) furnish said services on a reasonable, and not unjustly discriminatory, basis to all users thereof, and
2) charge reasonable, and not unjustly discriminatory, prices for each unit or service, provided that the contractor may be allowed to make reasonable and nondiscriminatory discounts, rebates, or other similar types of price reductions to volume purchasers.

e. Each air carrier using such airport (whether as a tenant, non-tenant, or subtenant of another air carrier tenant) shall be subject to such nondiscriminatory and substantially comparable rules, regulations, conditions, rates, fees, rentals, and other charges with respect to facilities directly and substantially related to providing air transportation as are applicable to all such air carriers which make similar use of such airport and utilize similar facilities, subject to reasonable classifications such as tenants or non-tenants and signatory carriers and nonsignatory carriers. Classification or status as tenant or signatory shall not be unreasonably withheld by any airport provided an air carrier assumes obligations substantially similar to those already imposed on air carriers in such classification or status.

f. It will not exercise or grant any right or privilege which operates to prevent any person, firm, or corporation operating aircraft on the airport from performing any services on its own aircraft with its own employees [including, but not limited to maintenance, repair, and fueling] that it may choose to perform.

g. In the event the sponsor itself exercises any of the rights and privileges referred to in this assurance, the services involved will be provided on the same conditions as would apply to the furnishing of such services by commercial aeronautical service providers authorized by the sponsor under these provisions.

h. The sponsor may establish such reasonable, and not unjustly discriminatory, conditions to be met by all users of the airport as may be necessary for the safe and efficient operation of the airport.

i. The sponsor may prohibit or limit any given type, kind or class of aeronautical use of the airport if such action is necessary for the safe operation of the airport or necessary to serve the civil aviation needs of the public.

What power does the airport authority and or local government have over Public airports receiving federal funds in their jurisdiction?

Response (FAA Customer Service Agent) 05/20/2009 03:46 PM
Grant Assurance 22. Economic Nondiscrimination, requires an airport sponsor of a federally obligated airport to make the airport available as an airport for public use on reasonable terms and conditions and without unjust discrimination to all types, kinds and classes of aeronautical activities.
Airport sponsors must grant access to ultralights, experimental aircraft and light sport aircraft (LSA) subject to reasonable rules and regulations governing their use of the airport. Normally these regulations will cover insurance requirements, registration, radio equipment and locations for landing and takeoff locations, if aircraft does not use the conventional runways. There is no federal requirement that provides for camping or bringing trailers on the airport; these activities are within the discretionary power of the airport sponsor. The airport sponsor may have legitimate concerns regarding airport security.

If the sponsor claims that restrictions are imposed for safety reasons, FAA will conduct a safety analysis to determine the reasonableness of the restriction. If a user believes that a restriction on aircraft activity is unreasonable and discriminatory, they can file an informal complaint with the local FAA office.

Customer (Grant Richardson) 05/08/2009 08:54 AM
What power does the airport authority and or local government have over Public airports receiving federal funds in their jurisdiction?

Do they have the right to not allow unregistered ultralight aircraft or registered Experiential or LSA to be based/ hangered on the field or fly from the field?

Do they have the power to allow or not allow a fly in event to take place on said airport?

DO they have the power to allow or not allow aircraft to be towed in via trailer to be flown at said airport?

The reason I am asking is a fellow pilot was planning an informal flyin/ get together were some people would come in with their aircraft on trailers and possibly camp in tents. Anyway the guy asked his airport authority and they said they could not allow this due to SECURITY reasons. In my opinion that word is just and excuse to say no. This is a small airport that doe not have much air traffic.

Is it true or not that Experimental aircraft have no Rights if the airport authority requires insurance or for whatever reason they declare?