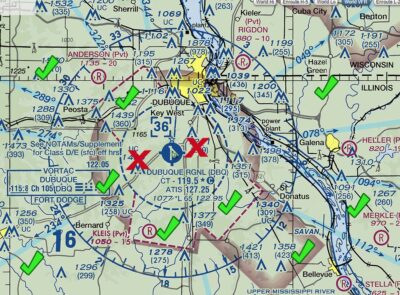 How we Know This is True

Understanding Class E surface area can be a pain. And is somewhat controversial. The link above handles the controversy part.

Above is a control tower airport (DBQ) and its D in dashed blue lines. X’s show what’s off-limits without permission. Green checkmarks show where you CAN launch which is everywhere outside the blue dashed lines. Notice that they’re OK to launch inside the dashed magenta-lined area? We can launch in that—it’s E airspace right from the surface. Everywhere else is G like most of the country. 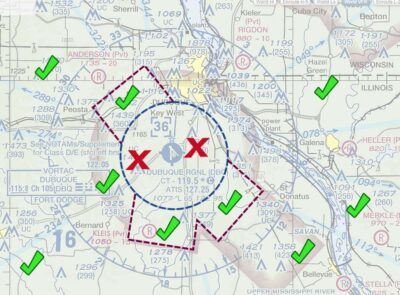 This one (above) makes the dashed lines more obvious: D inside the blue, E starting right from the surface side the magenta. Again, outside of the dashed lines is G airspace where we only need a mile visibility and clear of clouds to launch. A bit more disection: 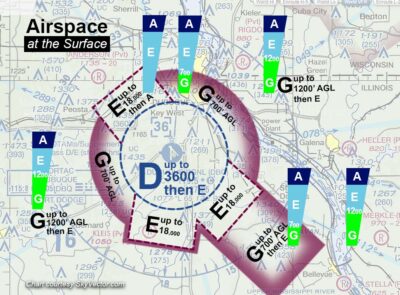 Here we show the magenta vignetted areas. All it means is that G airspace goes up to 700′ AGL instead of 1200 feet. E is above regardless. We fly in both G and E but need more visibility and cloud clearance in E.

But FAR 103.17 says we can’t fly in the “Class E airspace designated for an airport”? What does that mean? Here you go. 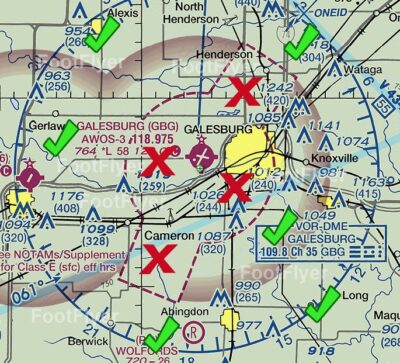 See how the dashed magenta go around the whole airport? That’s what 103.17 is talking about. We can’t fly in any of that without permission from the controlling agency. Who is that? One way to find out is go to SkyVector.com. Right click on the airport, click on the airport symbol, then look for communications. In this case it says “Quad City Approach.” Call Flight Service and ask them to patch you through Quad City Approach or for the telephone number. I’ve never ONCE not gotten permission. For one thing, they don’t know why you’re calling because most controllers don’t realize ultralights need permission to fly in that. Airplanes don’t–at least not if the weather is good.

Here’s another case where it feels surprising that we can fly there: an extension northeast of Colorado Springs Airport (COS). The airport has Class C airspace around it with an overlying shelf. Plus there is a Class E surface area to the northeast. That’s what we’re interested in. 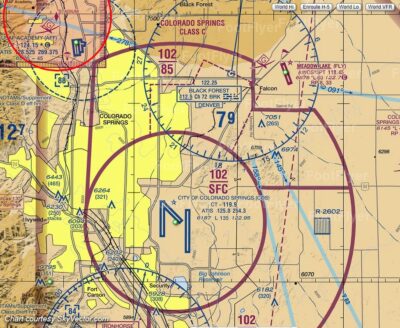 The surface area of E to the northeast, outlined with magenta dashes, is defined in the FAA’s Order 7400.22, 6003. Class E Airspace Areas Designated as an Extension. The Class E airspace areas consist of airspace extending upward from the surface designated as an extension to a Class C surface area.

We’ve highlighted the area below. Again, we can fly here without permission. Since it’s E airspace we need to have 3 miles visibility and stay far from clouds (500 below, 1000 above, 2000 horizontal). 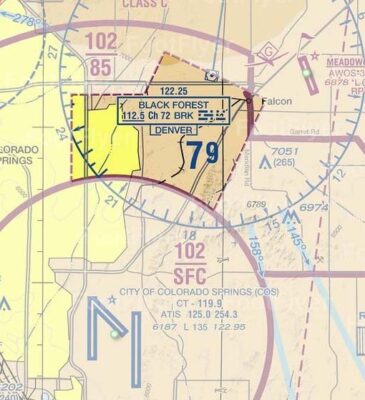 Below is a broader look at the same airspace. Don’t mind the Temporary Flight Restriction (TFR) related to a sports game. That’s a bonus. SkyVector attempts to show these but it’s not perfect.

Above you can see what kind of airspace you’re launching in and what’s above. Notice in the dashed magenta lines you’re launching in E right at the surface. That’s fine, you just need the higher cloud clearance and visibility. Wheras in G it’s only a mile and clear of clouds. 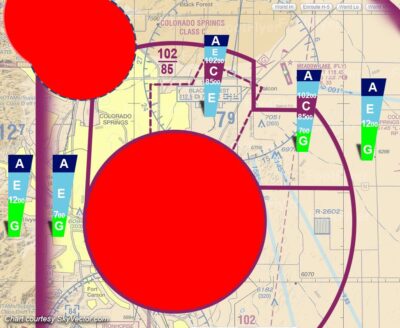 These are where we can’t launch without permission from the appropriate air traffic control (ATC) facility.

Hopefully this helps enjoy a few more places among the dwindling places we can launch. Represent us all well, and enjoy!