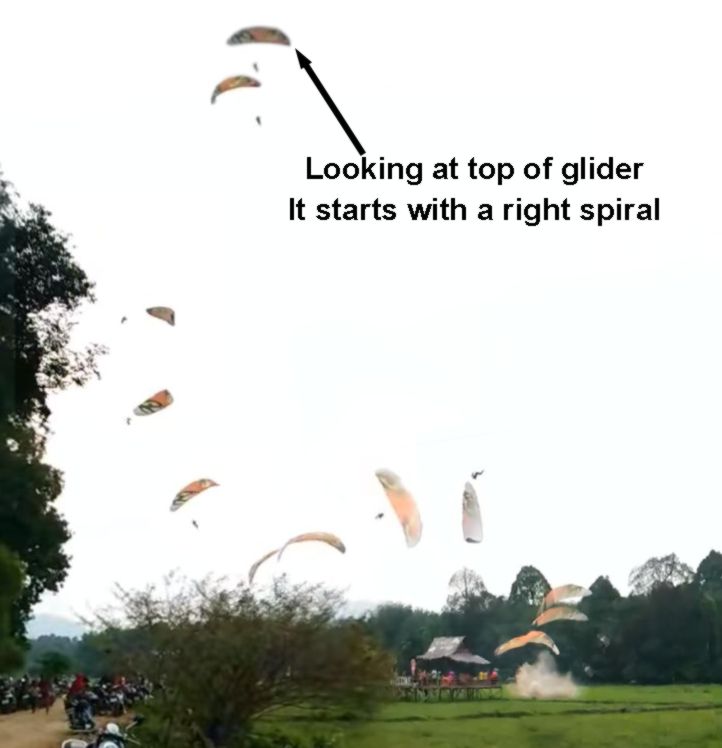 Someone sent me a link to this crash, apparently in Thailand but I’m not sure. It graphically exposes something that I’ve covered a lot: the extraordinary risk of doing steep maneuvering low to the ground. I’ve lost two friends from this.

Much like round spirals, the risk doesn’t SEEM so bad for a pilot who has become competent at steep wingovers. Of course it’s even worse for someone less adept, but this fellow had good control, probably knew how much room it took, and did them up high with nary a problem. He kept it straight with the slipstream avoided tip collapses, so indeed he the technical part down nicely. So why the risk?

At the bottom of any maneuver, especially after a spirally dive, G’s are higher. A little steering input (brake and weight shift) does a LOT. Way more than under one G. So it would be easy to go just a bit steeper than you wanted and end up pointing more straight down at the ground than expected. Then it’s just you and physics. By the time it’s recognized that the ground will intervene it’s almost certainly too late. Pulling brake can only do so much since you must still swing under the wing and judging from how often there’s no brake input (as in this accident), the pilot doesn’t recognize it until way too late. Had he given a bunch of brake at the same time he went full power it may have helped, but probably not enough.

This accident likely involves a bit of additional Camera Courage, too, given the crowd. This hits me close to home because I’m about to do a demo and I need to remind myself how important it is to fly just a bit more conservatively than I have in practice.