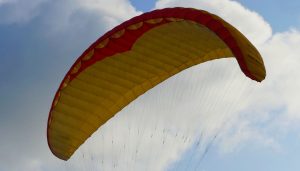 We’ve covered small wings, because that’s been a trend for some years, but what about larger wings? Is it dangerous to fly big wings?

This is really about wing loading: all-up weight per square meter of flat wing are. The chart in that article shows the sweet spot is around 9 lbs per m².

Here are the pros and cons of flying at light wing loadings.

Up to a point, it takes less power to fly them. Speed decreases with lighter wing loading which means drag decreases. Power required, and therefore fuel burned, just to stay aloft decreases. Since speed slows down, mileage (miles per gallon) may get worse.

Run speed is slower to liftoff.

The lighter your loading is below ideal, the more powerful these affects are. I’m 145 pounds and have flown a tandem wing but did it on a calm morning. I wouldn’t dream of doing that in anything over level 1 turbulence (see bump scale).

At least one pilot is no longer walking after an accident that happened after taking up a large glider in level 3 turbulence, which isn’t that bad. It folded up and he pounded in. Of course we can’t know for sure that this would NOT have happened on a properly loaded glider, but such a collapse was extremely unlikely in those conditions.

I point these things out as a reminder to myself of how consequential these decisions are.