Flying under Bridges or Power Lines 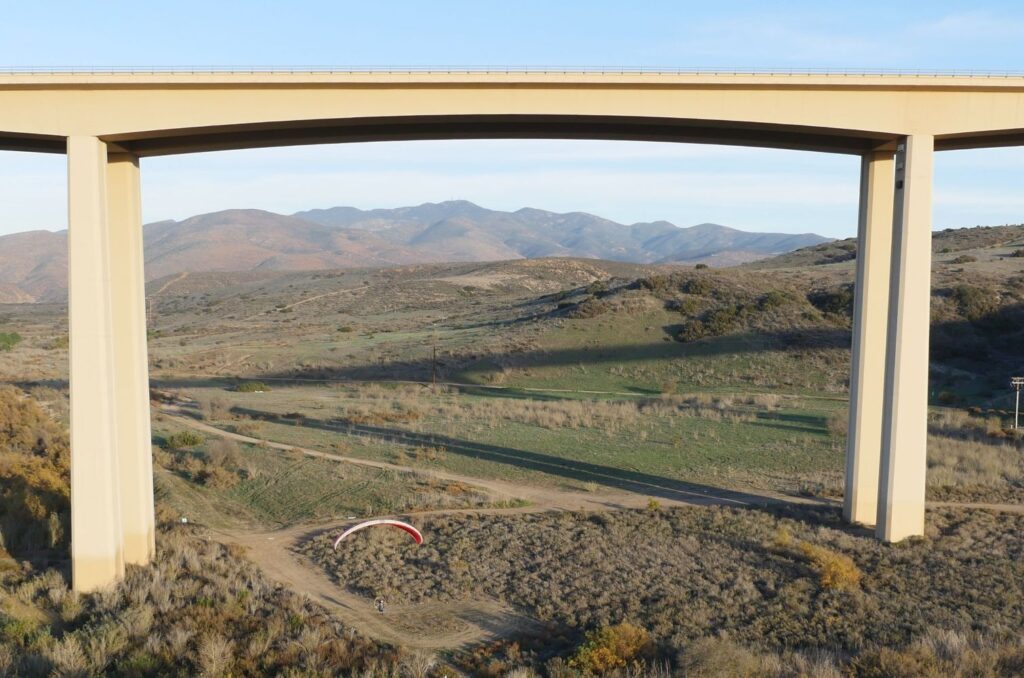 Tim Kaiser flying under a bridge near San Diego, CA

This one concerned flying under power lines or bridges, so I’ll offer up my pair of pennies.

There are two common questions: Is it legal? And is it safe?

As usual, it depends.

One thing: if it looks dangerous to you, it is! Does that opening, in those conditions, at your current skill, look restricted enough that you question the clearance? If so, it’s dangerous. Given the consequence of hurting yourself AND cutting off people’s electricity, it would be a horrible idea.

Aa a part 103 ultralight, we’re not allowed to fly over congested areas, and busy roadways HAVE been called congested at some times of the day. But we’re flying UNDER the roadway, so that wouldn’t seem to apply. And it’s not a technicality–the congested rule, like all of part 103, was written to protect non-participants. We also can’t endanger others (103.13), so these rules go together.

Look at the picture above. Huge bridge, huge abutments, tiny paraglider, tiny pilot: the bridge wouldn’t even notice the impact. At worst, park workers will have to clean off the blood. But we’re only going 30 mph. Is there any way he’s risking the cars above? Obviously not, given that he’s flying UNDER the road. Yes, it sure seems like it’s legal.

What about airplanes? THEY fall under FAR 91.119, which among other things, requires staying at least 500 feet from any man-made object. I suppose some super-tall bridges with widely-spaced supports could work, but I don’t know of any. Plus, they also have their own catch-all reg about doing stupid stuff (91.13 Careless or Reckless).

In the case of the pictured bridge above, not at all. It was nearly calm, and the pilot just finished a foot drag. Read that “controlling flight within a few dozen inches.” He’s not going to hit the bridge. Essentially any paramotor pilot after 30 flights has the accuracy to fly within 20 feet of a desired path while in cruise. Hitting a bridge abutment would be the expression of remarkable incompetence. With light winds, the bridge itself would cause minimum air disturbance. In a strong wind, all bets are off and this could be a treacherous pursuit.

A small bridge or being close to its deck could cause risk to motorists, but that would be pretty obvious. More risk comes from distracting the motorists than from colliding with them. Of the few bridges I’ve flown under, there wasn’t the least bit of risk to the motorists or from the bridge itself given the mellow conditions I was flying in.

What about power lines? The concepts are the same but carrying a half-million volts, and people’s power adds concerns.

If it was fairly calm, the lines were well off the ground like high tension lines are, over mostly flat terrain, and he was flying only a few feet above the ground, there is almost no risk. The lines are probably a minimum of 40 feet above the ground at the mid-point sag? We’re VERY high resistance, and I strongly suspect that we wouldn’t elicit a line-to-ground discharge without actual line/ground contact. At those voltages, we’re conductive but have to complete a circuit to ground. Then, of course, we’re done. But at that height, such a grounding would be impossible unless we also tangled with the tower. I welcome correction to my understanding of electric behavior at these high pressures.

Flying under wires is not something I’ve ever done, mostly because of the optics (including to me), and even though I suspect the actual risk is minuscule in the conditions described above.

Risk goes up if it’s bumpy because there’s more chance of getting lifted into the wires. Hitting the wires and causing a big shutdown could be catastrophic to someone relying (unwisely) on electricity. That takes some pretty bumpy air. I’ve never been lifted that much while flying within a few feet of the ground, even in moderately bumpy air. Risk obviously goes up as clearance goes down. Doing it near lower-hanging lines would be far worse.

We know how much risk is imposed by hitting power lines, given how often it happens. There seems to be an even chance for serious injury with permanent damage and about 1 in 30 chance of dying.

The FAA would only care if they felt the operation endangered others (violates FAR 103.9), and it was brought to their attention. I’ve been told that they don’t act on videos as the only evidential source, at least as of two years ago. The possibility of hitting the wires and causing a trip-off MAY get their interest if a complaint was brought to them, but that complaint would almost certainly have to come from law enforcement to get them to act.

We have to be at least a bit mindful of what we look like to others. Obviously, that’s not everything, but like so many things there is balance needed. I’ll admit to pushing a few envelopes, albeit not with power lines. That’s mostly because I probably have an irrational fear about how far current can jump. You know it’s not farther than the lines are apart. But still.