I am a new pilot in training and wanted to have a decent Flight Helmet with two way comm so I could talk with my instructor while flying. I also wanted it for future cross country flights.

Sure there are some sweet units out there, but they seem to start at over $300. Being a “Creator of things” I set out to build my own and save a few bucks. Another thing was most of these helmets have the PTT on the ear cup, not real handy for a PPG pilot. So I started snooping around. I found a PPG friendly PTT system at FootFlyer.com. While the price is reasonable, Jeff also had all the info on how to build it. So from that point on it was “Game On”.

The build – First step was to find a cheap comfortable helmet to start with. Wal-Mart, here we come. I found a cool Bell Multisport helmet complete with flames for $39.99. There were cheaper ones but this one fit me the best, and the flames were cool, too. Next was a headset. I hit trusty old E-bay for that. It was an older Flightcom 4DX headset. I won it for $20, shipped. 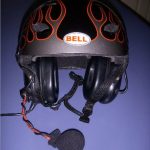 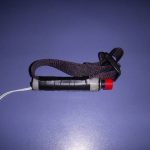 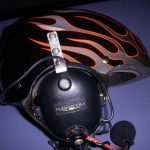 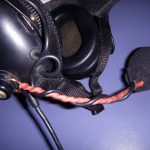 Helmet from Wal-Mart, other parts from Radio Shack. Works good, cost about $100 total.

Put It All Together

I had to cut the sides of the helmet a bit to fit the ear cups, I used a Dremel tool to make a nice quick job of that. I took apart the headset and made aluminum brackets to fasten the ear cups to the helmet. This took some time to get everything bent so it would function properly. The object was to have positive tension against your head but not be uncomfortable. It also make it easier to get on if you can pull the muffs away while you slide the helmet on. This took a little thought. I came up with a two bolt system with a spring on the lower bolt to provide the tension, while the top bolt acts as a pivot. This is adjustable by tightening the nut. The spring is housed on the inside of the helmet in the thick foam. It actually works really well, much better than I expected. Simple yet effective.

There was one large plug on the headset were my Midland FRS radios had two plugs. One for the headset and one for the mic. So off to Radio Shack. I got the correct size plugs with solder connections. About 6′ of two conductor audio wire and a momentary switch to use for the PTT. All that was about $10. I cut the plug off the headset and figured out what each color wire was responsible for controlling what and went to work soldering.

I used shrink tubing to cover all my solder connections, this kept it all looking very neat. The PTT button is threaded into a short piece or rubber hose with a 3/4″ nylon strap taped on. Not real pretty but it was stuff I had. Sorta feels like a throttle. I also removed the wire mic boom and replaced it with some 12ga copper romex wire twisted and covered with shrink tube. Turned it into a flex boom.

Lets give it a try

Wow, everything worked, sorta. The Electret mic on the headset was only working sometimes. I wasn’t sure if it was a radio/mic comparability problem or just a bad mic? I opted to source a used surplus M101 mic from the link posted on Footflyer.com. $24 shipped.

Try again – the M101 mic came and I wired it up. It worked with the remote PTT but didn’t work with the Radio PTT. This had me scratching my head and I still never figured out why. But for my application as a PPG pilot I have no need for the radio PTT, so I considered it good to go. I added a Mic wind muff from Radio Shack for $6 to finish the project.

First flight. I put the PTT in my jacket sleeve during launch so it wouldn’t be in the way during inflation. Once at altitude I pulled it out and enjoyed two way comm with my instructor. I have had a few flights with this system, it works great and is very comfortable. People on the ground say it is impressively clear with no wind or motor noise. I also use this helmet for kiting practice and plug my I-Pod into the headphone jack and listen to music while kiting.

This project took some time and thought and in the end cost me about $100, not bad. Thanks to Jeff Goin at Footflyer.com and Kevin McKelvey at Flylikethis.com for their help in putting this all together.