These are some of the media reports on our little sport.

One interesting phenom of the last few years is the popularity of Tucker Gott’s Youtube channel. It’s not a general media outlet, but judging from his view counts, he reaches more eyeballs. The video below is his most popular of all paramotor-related videos: he narrated a flight to Mcdonalds for a sandwich then ate it on the way back. To my knowledge, this is the most heat any video on paramotoring has EVER GOTTen! Some significant increase in paramotoring’s growth has almost certainly come from his content.

It’s been fun to correspond with Ali Kabas over the years as he captures beautiful sights from some of Turkey’s beautiful sites using his paramotor. He was featured in a short documentary by one of the Country’s big newspapers.

The audio is in English with subtitles.

One of the more fun aspects is that he gets to share his passions with his 2 children. It’s fun to see a well-done peek into the private life of someone who left the business world to pursue their passion. “The Weekly Special” showcases our sport through the eyes of a long-running event, the Indy Air Hogs fly-in. Like most of our paramotor groups, this one is a fascinating collection of people who come together as pilots to share in their passion. By day they are mild mannered… well, just watch the thing. 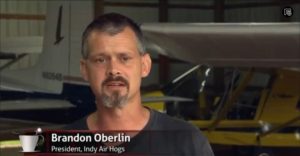 When Paul Czarnecki is looking to relax or meet a group of friends, he’ll just fly away or have others fly in. Not in an airplane, but by themselves in a powered paraglider. Czarnecki is part of an increasing number of adventure-seeking enthusiasts nationally who have taken up what is part sport and certainly part adventure.

Paragliding is the simplest form of flight, no plane, no windows, just you floating in the open spaces.

Czarnecki started paragliding while working as an engineer in England and once he moved to Cape Coral in December 2006 he started operating the UCanFly2 school that is certified by the United State Powered Paragliding Association.

“Powered paragliding is the most basic way to fly. I fell in love with it at the very beginning,” said Czarnecki, 47, a native of Kingsport, Tenn. whose father was an instructor in the Air Force.

“It’s the best fun you can have. I call it ‘airgasmic,’ wildly addictive,” Czarnecki said. While a paraglider certainly gets a rush during flight, the fear factor can also be present. A recent convert is 31-year-old landscape contractor Doug Johnson of Cape Coral, who joins Czarnecki most weekends around a remote part of Caloosa Parkway to start a journey.

I had an absolute fear of flying and heights. I would never go to Busch Gardens for that reason,” Johnson said. Then he noticed Czarnecki and friends flying above his house in northwest Cape Coral. “I finally checked it out since it looked interesting and safe,” Johnson said. “I took a number of lessons from Paul and then the moment arrived to actually go up there by myself. I purchased the equipment and now have over 60 flights.

“Any fear is gone and it’s an exciting way to see nature all over the area, from Fort Myers Beach to Sanibel.”.”

Czarnecki understands the early trepidation. “There is no middle ground in flying and a student, whether it’s my 15-year-old son or the 65-year-old from Michigan, needs to build confidence,” Czarnecki said.

Czarnecki spent six weeks and nearly 40 lessons with Johnson. “Everybody learns at a different pace, making progress in their own way,” Czarnecki said. “You take small steps at first, learning the controls, understanding the motor and wings and the procedures involved.” “We live in one of the best areas in the entire country for paragliding because of the flat land, open spaces and good wind currents,” Czarnecki said. “All you need is about an open area of 300 feet for taking off and landing.”

A paraglider is a foot-launched inflatable wing, easy to transport, launch and land. The paraglider itself has no rigid structure, and lines clipped into a harness suspend the pilot. The motor is a backpack unit with a propeller to give thrust, allowing a glider to climb and fly at almost any level.

Instruction costs start at $150 for an initial session that will include a tandem flight while a USPPA approved teaching package is $1,000 for 10 flights. A motor starts at $3,500 while wings start at $1,700.

The flying limits are 18,000 feet, imposed by the Federal Aviation Administration, which governs paragliders under the experimental rules category. “You’re not going to fly over downtown Fort Myers. Where we go depends on the wind and we’ll make a trip, for example, over to Lake Wales,” Czarnecki said. Czarnecki has recruited his 15-year-old son, P.J., but is still working on his wife, Jennifer.

P.J. has learned to fly before he can drive a car but Jennifer is not ready yet for a solo flight. She still plays around,” Czarnecki said.