It happens to even the most conscientious. Thanks to this pilot who had the balls to share his horrific experience so that others will hopefully avoid a similar fate.

I would like to begin with a little history of my background to help emphasize that, if this can happen to me, it can happen to about anyone in this sport.

This simple stand could easily prevent many paramotor prop injuries

I soloed my first aircraft in 1963 and went on to earn a commercial pilot license, logging several thousand hours of flying time along the way. After entering the army I became a paratrooper and moved on up the ladder to qualify as a Jumpmaster, one of my life’s most demanding accomplishments. It requires 100% on the test–just one missed item being inspected on a fellow trooper disqualifies you. Being a Jumpmaster is all about the responsibility of inspecting equipment and being totally responsible for the safety of yourself and fellow troopers. The reason I spell this out is to build a case on how easy it is to become an injury statistic with our PPG (Powered Paraglider) equipment even after having extensive training and experience.

I flew into an airport years ago in a fixed wing aircraft and was in the process of securing my plane for the evening when a plane taxied up next too me. I glanced over to see a man and a woman in the plane and he (the pilot) appeared to be telling her something. She exited the idling plane in an attempt to guide her husband to the tie down points; she walked directly into the prop of the running plane. After having experiencing something of this magnitude one would guess that I would never, never let my guard down around a spinning prop. Wrong!

I have been flying PPG’s for several years and have accumulated in excess of 2,000 flights. I normally use the PPG Safety Bridge as a secure method for starting but didn’t have it with me. Knowing that running our motors up while working on them is a very dangerous thing to do, I’ve built several thrust testers and have given all but one away to try and improve our PPG safety record. Both the thrust testers and Safety Bridge were designed to safely secure the motor while starting or working on them. I have preached for years the importance of securing our motors prior to starting them on the ground.

I had worked very hard all day and had one last mission to accomplish for the day. We were having a border dispute with a neighbor and I planned to fly my PPG and get some aerial photos to prove our side of the disputed border. It was getting late in the evening but the weather and wind were perfect so I drove over to the part of the ranch where I keep my PPG equipment and got it all out. After laying my wing out, I got the motor out of its trailer.

I pulled and pulled on the starter with no signs of it starting. I remove the plug and inspected it and decided to install a new plug, no time to analyze the old plug, for I was running out of good daylight for photos. I Reinstalled the new plug and pulled and pulled with no signs of the motor attempting to start. Now I am becoming very upset and tired, having already worked 10 hours this day. I was in no mood for motor problems. I removed the plug again and it appears to be dry so I reinstall it and blow more fuel into the carburetor; again I pull and pull to no avail.

So now I am now very tired, angry, complacent and apprehensive about running out of day light to get my photos. My mental safety mechanism has shut down. I have since called it my perfect PPG storm.

I once again removed the plug only to find it gas soaked, so I installed a new plug and started pulling. At this stage of the game it dawns on me that the unit is flooded for I smell gas. A little voice goes off in my head saying �apply full throttle and pull start it again.� I squeezed full throttle and pulled the rope. Bang, the motor starts and the throttle is stuck in the full throttle position.

My fun machine became a wild, flesh-eating monster trying to cut off my hands, arms and head. Knowing that I can not hold the motor at full throttle I am very fortunate to have had the where-with-all to restrain myself from grabbing at it with my hands. Instead I turned my shoulder to it trying to roll away from it. My shoulder was pushed against the netting allowing prop contact resulting in lacerations from the top of my shoulder to under my arm. After the prop did its damage the throttle returned too idle, luckily affording me a chance to get things back into control.

The depth of the cuts was to the bone, yielding a lot of nerve damage. The propeller struck my shoulder 3 to 4 times in a split second. I had boots, gloves, long sleeve shirt and a helmet on at the time of this accident. I was alone on the ranch and 15 miles from the hospital. An artery was severed and I consider myself very fortunate to be alive today.

After a rush trip to the hospital and 2 and 1/2 hours of surgery you can see the results at right. It is a graphic photo, but I want it to be in hopes it might imprint in everyone’s mind, perhaps preventing this from ever happening to others.

I have always prided myself as being very safety minded, but as the above story shows, if we become smug, these wonderful machines can and will jump up and bite us. The carbon fiber propeller on this Black Devil missed my neck by only 2 inches. Oh, by the way, my thrust tester and PPG Safety Bridge were home in my garage. Having just returned from the Galveston fly-in and visiting with Andy McAvin about his encounter with a prop I have decided to put this story in print. Out of embarrassment I have struggled over and over about doing so but have come to the conclusion that if it helps prevent one accident of this nature, I will gladly accept the humble feelings of being embarrassed and self-conscious of my accident.

With lots of willpower and a high tolerance of pain, six weeks to the day after the accident I was back in the air. I will suffer some long term nerve damage and considerable mussel loss, but I am more than grateful to be back home in the air. In my case, pain suffered will serve as a wonderful aid in postponing any future complacency!

I wish to encourage Jeff Goin to continue his crusade in making our PPG cages more resistance to these kinds of prop strikes. With a love of our sport I dream of the day prop strikes are a thing of the past! 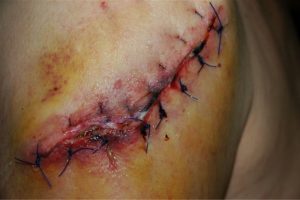 Sorry for being graphic but it emphasizes what’s at stake when a mere moment of complacency lets our guard down.

A recalcitrant motor, the pilot squeezing some throttle, and a momentarily bad grip led to this nearly fatal prop strike.

A common refrain in prop injuries is difficult-to-start motors that spring to life with a surprising vigor. Aggravating the problem is if the motor requires throttle to start.