Can you fly the grand canyon?

Yes, but with huge caveats.

Mostly you can fly over the canyon, WAY over, but there are some airports where you’re allowed to takeoff and land from, climbing to the minimum altitudes within 3 miles of their runway’s center. There are also many BEAUTIFUL and perfectly legal areas just outside the canyon, AND outside the marked wilderness areas (blue lines with dots).

Famous parts of Grand Canyon are heavily restricted by far §93.305 Flight-free zones and flight corridors as shown below. Purple areas prohibit flight below 14,500 but the entire dashed line area prohibits flight below 8000′ at the west end, rising to 10,000 feet at the east end. The whole Grand Canyon VFR chart is viewable at SkyVector.com or iFlightPlanner.com. The map has in inset in its upper right that shows the extension that goes towards Page, AZ (covered below).

As you can see from Grand Canyon Airspace (above) there are corridors for crossing the canyon as low as 9000 ft MSL. But with the surface between roughly 5000′ and 7000′ that’s slightly more palatable. Not foot-dragging, but well below airliner window altitudes. Tour operators have special permission to fly lower.

There are many areas outside the canyon that are also spectacular. Page, AZ is one example that I’ve flown. It’s on the back cover of PPG Bible 6 with Tim Kaiser and we were able to launch only a few miles away, if that. We stayed up high enough to not only be legal, be to avoid people calling the cops. If you are given a violation by the local police or park service, you may have been completely legal to fly there but still find yourself having to prove it. The concept of “innocent until proven guilty” has immense limits, so be courteous for your sake, the sake of those pilots who want to fly here later, and because we all hate A$$ holes. 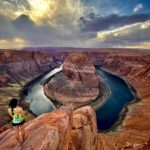 Richard Socher snapped his paramotor pilot fiance overlooking Horseshoe Bend, AZ. This popular tourist stop is legal to fly over as long as you don’t go beyond the rim. 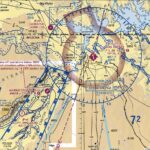 PGA View #1: This is near a popular tourist vista southwest of Page, AZ and is legal to fly provided you don’t go beyond the canyon rim wall. 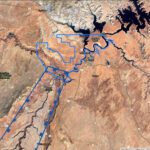 PGA View #2: Here you see the chart outlines overlayed on google maps. The lighter blue line is a portion of the dotted blue line on View #1 (Pariah and Glen Canyon areas). 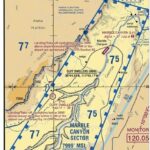 We can legally fly around Page, AZ. The airport there has no restrictions but is heavily traveled by tour operators, private pilots, and even regional airline flights, so it’s not very PPG friendly. Legal, but not welcoming.

Dotted blue lines show agency areas where pilots are “requested” to stay at least 2000′ above anything within 2000′ of their flight path. This verbiage is shown on the chart border (left side on the LAS chart).

Like nearly everywhere else in the country, airspace is G at the surface with E overlaying at 700 or 1200′ above ground level (AGL). We fly in both of these. Even Page airport, with the shaded magenta around it, is in G airspace. That shaded area means G only goes up to 700′. Everywhere else it goes up to 1200′ AGL. You need a mile and clear of clouds in G (think G for ground) and 3 miles visibility with more cloud clearance above that. Above 10,000 feet MSL you need even more. For more on “more”, see Chapter 8 in the book or here on footflyer.

I get that sometimes from people who are new to paramotoring cross country. They like to pull up to a site and just launch. I was that guy for many years but soon learned the downsides, thankfully mostly from others.

If you’re flying in someone’s park, even if it’s NOT marked on the chart, but especially if it is, and a park official issues a citation, you may have to either pay a large fine or spend thousands of dollars fighting it. If it’s Indian land, same thing, only you may also get your gear confiscated. Yes, it’s a travesty of justice, but the world isn’t fair. We should always be striving to make it so, but in the meantime, be aware of what’s possible. For a good example go here. Or here.

Pilots who fly airplanes there report frequent horrendous lift and sink with anything other than early morning calm. It’s the desert with huge cliffs, a potentially treacherous combination that deserves great respect. It would be particularly advisable to talk with local pilots, or at least those familiar with flying around canyons, especially in the desert.

Pick your times carefully and be quick to call off a flight if things aren’t adding up.