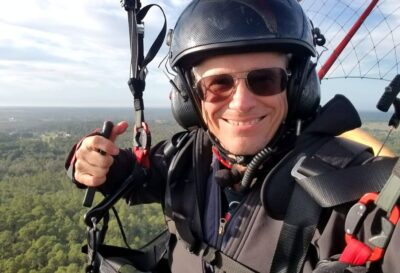 Effective Nov 3, I will be resigning as USPPA president and turning the keys over to Noah Rasheta — an extremely competent pilot, instructor, family man, and all-around great human. Once I’ve resigned, he must be approved by the remaining three officers and then takes over immediately. I will remain in an advisory role to offer any help desired. The office of president is an elected role, but if there are no nominations, or he is elected, then he will continue.

In June 2019, after two tragic Boeing 737 Max accidents, a switch flipped in my head: we need a generational improvement in airline pilot distant learning. This is not unlike what prompted the forming of USPPA, or writing of the PPG Bible, or the Instructor book. But now it was about airline flying where these accidents were horrific reminders of what’s at stake.

Company-issued iPads are nearly universal among airline pilots. And it looked like we (I fly the Max) would ONLY get training on those iPads, which currently means minimally interactive slide shows and videos. Haven written software for a paramotor simulator, I knew we could do better.

Our mission: dramatically improve how airline pilots learn and maintain proficiency in emergency maneuvers, cockpit “flows” (cockpit setup for the next phase of flight), and Flight Management System use. We have built, and continue to improve, a family of products doing just that. Real-time responses are first learned, then practiced, then self-tested using the airline’s specific aircraft and procedures. It works with the fact that we learn best by doing. Once the pilot learns on their iPad, they can optionally use a virtual-reality version of the exact same training to gain muscle memory, also in self-guided, real-time fashion.

As you can imagine, the project is immensely consuming, and is more than full-time as I help our small team develop, present, attend trade shows, and so on. Plus, I’m still working full-time as an airline pilot.

This has prevented me from attending paramotor events, accepting invitations for tasks I would have loved to help on, etc. More importantly, and the reason for stepping down, is that I have been unable to invest time in the U.S. Powered Paragliding Association (USPPA.org) in ways that it could really use. As president of the organization, that’s untenable.

I’m holding it back.

USPPA is healthy, has more money in the bank than ever before, stable membership, great volunteers, and is running smoothly, but there are LOTS to do. Lots we want to do. So I am bowing out.

This has been months in the making as my obligations to Reaction Simulation have intensified. Recently Chris Santacroce (training committee) wrote a message to the leadership about how he envisions our mission. We are on the same page, and it prompted me to act on my need to pass the torch.

Noah Rasheta, his Twin brother Nik, and myself, Jeff Goin, in the middle.

Noah Rasheta is passionate about people, training, and how to effectively and safely turn people into pilots. He is highly respected, embraces the positive, and strives to be gracefully effective in whatever he takes on. When I asked him about this, he enthusiastically took it as an opportunity to give back to a community that has given so much. He has plans that gel with what we all want.

He respects that we have the most freedom of any paramotor pilot on the planet and that it’s worth preserving. And we don’t want to replace the FAA with something worse. Of course we also want to ensure prospects that being a USPPA instructor means something. I’d rather a smaller, more meaningful org, than to accept substandard performance. That’s tough and is something the org was already working on.

I’ve admired the SCUBA orgs PADI and NAUI. Recently we sought advice on how to handle Quality Assurance from PADI and will likely adopt some of their methodologies. Noah is a NAUI Dive Master. He gets it.

It has been a great run, and I look forward to seeing what the org can become. Thanks to so many people for so much support over the years. What a great ride.

I won’t be stopping flying, of course, and will still contribute as time allows, but it will be a new chapter.

Here’s to changing the world for the better!