Portable Transponder For Ultralights (ADS-B out) 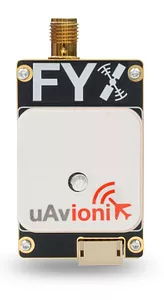 Collision avoidance would sure be nice to have, especially for those of us who fly in airplane-infested skies like near airports. It’s our obligation as FAR 103 pilots to avoid other traffic but that’s doesn’t mean we will see everything.

ADS-B is a system that improves coverage of traffic and is now required of any airplane that wants to fly near big cities or up very high. That’s most of them. We now have it in both our aircraft, a Beech Bonanza and Enstrom helicopter. It’s awesome, we can now see most traffic on iPad-type displays or phone that Bluetooth to the transponder.

But we don’t see ultralights.

An increasing trend in Drones (more officially called Unmanned Aerial Systems or USA) is to broadcast their position using ADS-B, while at the same time actively avoiding aircraft that are detected. My proposition is for paramotor, and other ultralighters to do the same thing using a portable system.

uAvionics makes the pint2020i for UAS but there’s no reason why it wouldn’t work for us. They’re probably don’t market to ultralighters due to some insurance nonsense but the liability would seem to be negligible, mostly because the device doesn’t interfere with anything.

The device has its own GPS and barometric altitude source so all you must provide is money and power. It also reports on other aircraft if you have the appropriate phone app.

Cost is an issue (it’s $2000), for sure, but I know pilots who would be willing to pay if it was a clean, workable solution. Privacy has been a concern but ultralighters and drone pilots don’t actually need to provide personal information. Just set it up to have a blank “N-Number” and have the category as UAV (unmanned aerial vehicle).

We’ve had collision avoidance on our aircraft (a helicopter and airplane) for some time and find it invaluable for knowing where traffic is. Just knowing there’s someone nearby piques our lookout and, in a  few cases, it has enabled easy course changes to avoid collisions. Of course there’s a lot of traffic out there that doesn’t show up starting with ultralights. More of THOSE guys are getting ADS-B out, though, so the situation is improvming.

Another technology, FLARM, serves a different purpose that’s more about keeping one glider away from another glider. That’s cool, but doesn’t do us as much good because the airplane drivers don’t see us.

What the paramotor (or any ultralight) pilot would do is put it together the hobby battery (in a fireproof bag) in a pouch and wear it while flying. The battery must last for the flight’s duration but it’s pretty low consumption since the target audience is drone pilots. Search for uAvionix “Ping 202i”.