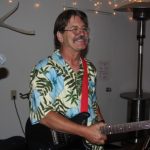 Greg (right) has many things wrong with him, not the least of which is strapping on a butt-fan and leaping aloft. Even worse is his propensity to create weird songs. Here’s an example. And keep listening for the PPG references.

Greg lives near Albuquerque and frequently played with the local group “Pilot Project” for several years. The song was featured at various gatherings in Albuquerque and elsewhere.

Above: Hit play and enjoy.

OK, sometimes prioritizing is definitely not my strong suit. Yes, in fact, there are about a dozen things I should be doing. But I just couldn’t resist.

Bubba Peters is an accomplished pilot turned out to be an accomplished singer, too, as I discovered in 2007. When I heard heard him belt out tunes at a Karaoke party I was impressed. Having my song in mind, I asked if he would be willing to record it. He did and you can hear the results here. Someday, I’ll leave my senses behind and make a music video out of this. For now, audio will have to suffice. Nice work Bubba!

Twas the Flight Before CrissCross

The motivation for this sprung from the story of a hang glider that nearly got swatted by a Qantas airliner. Qantas flight QF761 was about to start its final descent into Adelaide near Mt Pleasant early on February 17, when its pilot saw the hang glider and took evasive action, according to a Qantas staff magazine. The incident was reported to the Civil Aviation Safety Authority and the Australian Transport Safety Bureau. (Post # 2767).

Someone else commented on the story: “The guy was taken in for questioning shortly after he landed his HG at the local mall. Authorities apprehended the pilot in the Wally-Mart Store buying a new pair of underpants and an extra large box of baby wipes. When asked how they knew this gentleman was the pilot the arresting officer said: “He was easily identified by the unusual way in which he was walking and by the really obnoxious smell evident when within ten
feet of him”.

It sure was a close one but I’ve got now to go
My shorts are all clean, hope you all liked the show

And thanks Wally-mart for the big open lot,
with the kids jaw-dropped faces all covered, with snot.

I now know much better of that I won’t fight,
its always best, too turn on some light”…

And so we silently listened as he flew out of sight,
saw his strobe now a flashing bright white was that light.
But just as he faded completely from sight,
yes I heard him declare booming into the night:

“I’ve now learned MY lesson, I know now what’s RIGHT!
Qantas STILL holds their record, in spite of the fright…
So when day breaks in morning you’ll see us both in the air
nice meeting you all, and to all, you take care!”

We smiled contently, walking back to the ‘Mart’,
now there goes a man who is now…VERY smart…

When over the engine I STILL heard his Din
“You know that I sin not just once only today,
In all the confusion I for-got to pay,

but the sun’s quickly setting on this most scary day,
so I bid your forgiveness, as I’m quite on my way.
Regarding the future I’ll always use light,
See you shopping next Christmas and thanks…for the WIPES! “