TFR’s: How to Find Them

Temporary Flight Restrictions (TFR’s) are off-limits airspace. They carry degrees of repercussion, all the way up to getting shot if you blunder in, especially towards what the TFR is protecting.

But where are they?

Google “FAA TFR Map” and you’ll find their map, but it’s truly lame. And there’s a caveat about it potentially not being current. Uggh. The best way is to call Flight Service (800wxBrief), tell them about your flight, and ask for TFR’s. Plus you’ve now got recorded conversation showing your due diligence in case there’s a question later.

A better map is SkyVector.com which operates smoothly, has many other features, and most importantly for this article, has a layer for TFR’s. When you want to see where they are relative to your flying site, this is perfect. Plus it includes sporting event (stadium) TFR’s which are still in play, even if the fans aren’t.

In the example below there are a bunch of TFR’s. Orange is not yet active, while red is currently active. You can tell presidential TFR’s because the restrictions are big–30 nm. Plus a rocket must be launching from NASA. Lesser VIP’s only get 10 nm radii. Click on the TFR for more information.

To get TFR’s to show up on SkyVector.com, select the “Layers” button (see below). A menu below appears. Click the desired layers and close. Voila!

Now you can avoid getting shot out of the sky—a true benefit of knowledge.

Another great tool is phone apps. Any of the big ones meant for airplanes will work but in the example below is one meant for the general public. It’s My Radar for iPhone and Android. Besides showing winds, rain and clouds, it shows TFR’s, including their pending or active status. Aviation layers my only come with the paid version so check the program’s description. In this case, the screenshot is from their free version. Thanks to John Stovall for the screenshot and reminder. 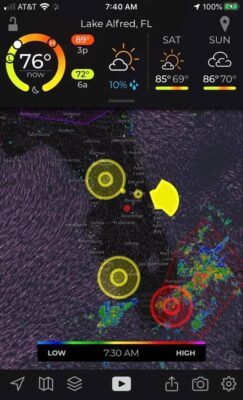