Three pilots and two crew members represented U.S. paramotorists in international competition—a first. This was a big deal and felt like it, with extravagant ceremonies, paid hotels, meals and local transportation. Italy put on quite the show.
Our team, consisting of myself (Jeff Goin), Chad Bastian and Stan Kasica, ended up with 6th, 14th and 18th places amidst an intensely competitive field.

Thanks to those who contributed with travel expenses through the USPPA fund. It was much appreciated. Competitors still ponied up over a $1000 each to get there and back but that was so worthwhile. 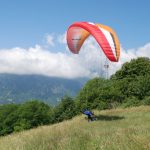 Soaring on our days off at the 2009 World Air Games 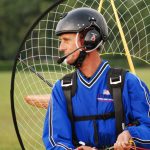 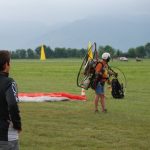 “Flag up, cleared to launch” 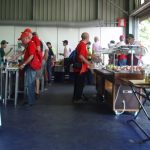 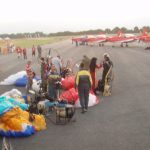 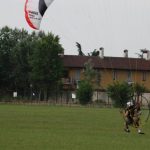 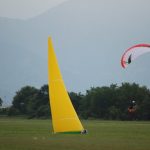 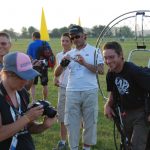 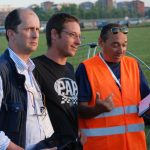 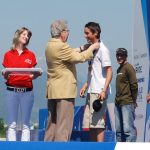 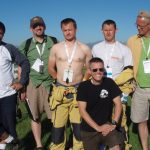 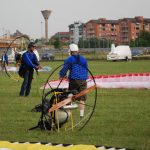 Getting ready to move 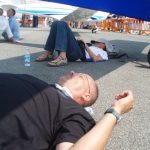 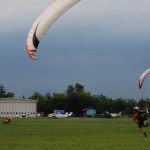 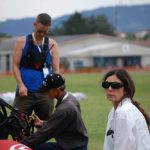 Carmen Rogers with Chad (sitting) and Jeff in the background

There’s no magic to competition. You just fly the tasks and let the scores fall where they may. It’s quite attainable for PPG2 level pilots. Don’t worry about being super steep or fast, just launch consistently, fly the courses correctly and don’t crash. Crashing is decidedly bad as we’ll soon see.

Any pilot who merely flew the courses correctly avoided the last places. A common misperception is that you have to be a daredevil risk taker to compete. It’s true that top placers fly pretty aggressively but, more importantly, they fly precisely. Wanking and banking is easy compared with precision control of track through a course and landing on a soccer ball.

Another cool aspect of even intense competition is the camaraderie which always seems to surprise me. Everybody wants intensely to wind but it’s surprisingly like a fly-in with purpose. There’s commonality, too, because everybody obviously enjoys precision flying as well as a good cruise. They talk about carburetors, wings, fuel, methods, etc. and nearly everybody I talk to is willing to share insights into their technique.

You don’t need special equipment to excel although a fast wing will be required to win at this level. My 6th place came on a DHV 1-2 Pluto 22 m² wing and Top 80 Miniplane. So when the next competition opportunity comes up, won’t you join us? Fly the courses correctly, don’t crash and enjoy the company.

The biggest reason not to crash is how many points it costs, even if it happens late in the game. And crashing is expensive from broken body and machine parts.

On nearly every task, crashing will result in zilch. The primary reason crashing is penalized so heavily is the time it takes to clean up. Prop shards travel a long way. If crashing renders the hardware or software unusable for future tasks there are even more zeros.

Secondly, we all tend to like each other and, after going through all that trouble to get together, we want to visit with everybody without going to a hospital.

Thirdly, it hurts. Earth is hard and very unforgiving. Plus, it’s frequently littered with the detritus of ground-bound humanity—power lines, cars, buildings, etcetera, that are all unyielding impediments to airborne progress and are best avoided. Mostly, though, it’s the ground that gets in our way during competition.

It was like a big parasmorgasborg—from the initial qualifier last year, instigated by Roy Beisswenger, to the Italian Extravagansa that made us feel like Olympians. I’m grateful. Also thanks to crew members Dave and Carmen Rogers, to those who helped out financially, and to Powered Sport Flying Magazine for our team clothing. You guys rock!

See ya at the next event.