Body contact with a spinning prop remains the most likely cause of serious paramotor injury and it can happen in unexpected ways. Here are some examples.

Reducing these accidents starts with awareness, and it’s is a good sign that you care enough to learn.

Limbs come to grief in several nasty ways, engine starting being the most common. We list others in order of their frequency. Unfortunately, most of these concerns go unresolved. A big help would be if manufacturers would create safer designs (see A Better Paramotor). It’s just too easy to brush it off as “we can’t protect people from everything.” While I certainly appreciate and understand that concern, I think we can collectively do much better. 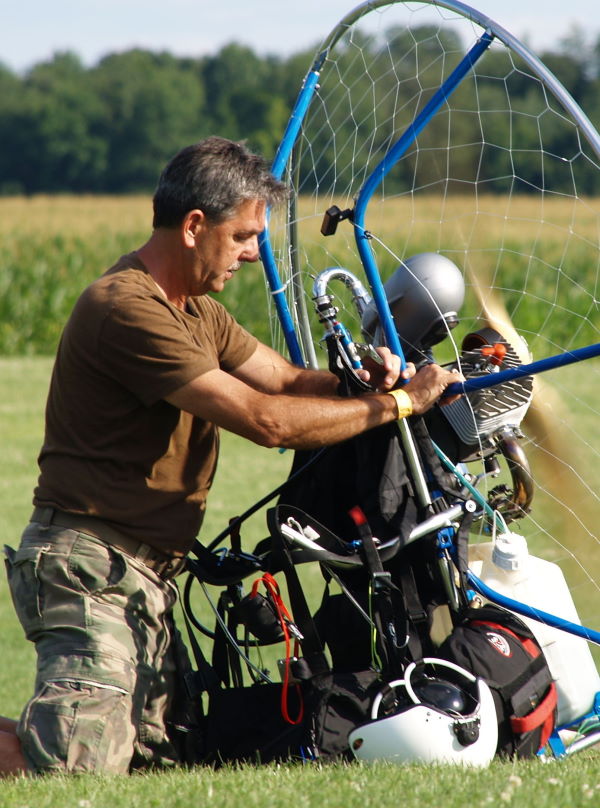 The most dangerous act a pilot does is starting a motor that is sitting on the ground. An unexpected surge of power may push the pilot so that even more throttle is squeezed, which increased thrust which increases throttle squeeze, etc. The pilot reacts instinctively to hold it back with a hand/shoulder/arm and the cage or netting is inadequate. Body meets blade.

Here is a video that shows how pilots with clutches can reduce prop strike risk. Here is a page (with video animation) to see how a cage can be improved.

Although its more common on pull start machines, it has happened to electric starts, too. In fact, electrics button-simple starting has caused problems on its own but mostly during maintenance.

The unexpected power is frequently caused by a stuck throttle at the carburetor. Just because the throttle handle is at idle doesn’t mean the carburetor is. And partial throttle may be enough to set off this deadly chain.

Always check the throttle at the carb! Do it before every start: stand with a firm motor grip and be positioned to handle a fully thrusting motor in case it goes to power. Rehearse in your mind that, if you are surprised, you will grab the frame and avoid, at all costs, trying to stop it by holding the cage.

There are sadly many of these. I’ve even had a close call and had to roll under a thrusting machine when it surprised me with half power. 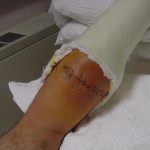 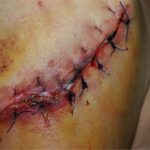 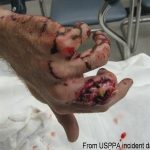 Once the motor is on your back most risk is gone, but not all.

See a better paramotor for design details but, among other risks, if the prop sticks out from the cage there is a risk that the pilot could bend his hand into its arc. I’ve seen pilots who can’t even duplicate that while standing there but, on launch, with everything bobbing about, it has happened several times.

Sorry to include this, it’s hard to listen to. But it’s also a good reminder of what can happen. This girl did get her finger sewed back on and, in fact, wants to fly again. She was launching a small-cage machine on which the prop stuck out behind the hoop. While running, she lost her brake toggle, went to reach for it and got a finger into the prop from around the cage rim. Chopped it right off.

At least two other pilots, one highly experienced, got their hands in the prop while reaching for brakes that they either forgot to grab initially or let go of during launch.

Another launch mishap happened when the pilot had too little leg protection at the bottom and got his calf whacked while running (see sidebar pic). He fell over immediately and managed to get himself to a hospital. He required major surgery to bring back most function. For over a year he eschewed paramotor flying then eventually got back into it.

(added 9/15/2007) One surprising incident happened to an experienced PPG3 pilot while forward launching in calm conditions on a rigid frame machine. According to USPPA’s report, he “Began inflation, got pulled back, applied full power. Hands got pulled into reinforced rigid cage/netting, prop contacted left middle finger only.” This is scary and gives a good reason to rethink our cage protection and prop clearance. In the meantime, rethink full power inflations although this one started out as a partial power inflation.

Falling backwards on launch represents a risk because your instinct is to put your hands down and back�right into the prop. Very few cages have enough protection here. I know of two of these accidents and am told that one pilot still doesn’t have use of the hand and that was 3 years ago.

It’s rare to have a prop strike in flight but a couple pilots have done it. Two happened when the pilot reached back for some reason and got a finger through the cage netting. Remember the netting on many machines is being blown back towards the prop and on others the netting presents large holes that can almost allow a hand through. Certainly fingers can go through.

In some brake positions on some machines you can end up with your hands reaching down and back and into the prop. Just being aware of the possibility may help but not necessarily. Far better would be to equip your machine with protection all the way down to the bottom of the frame.

The hand featured at the top of this article was whacked in this type of accident although it may have been an aborted takeoff. Obviously having the motor off (prop not spinning) will eliminate the possibility. There’s a trade-off there, however, since it’s best to land with power in turbulence.

I know of three serious injuries has that befell pilots working on motors, especially those with electric start. Doing maintenance with the cage off has proven unbelievably bad!

This is fortunately rare but I can recall 4 such incidents. Here are some examples:

1. A helper was pulling the pilot and got his hand caught or was slow to remove it. The pilot quickly accelerated using motor thrust and outran the helper who was still holding the frame. The helper got swung around and into the prop. There have been at least two of these.

2. A pilot started his motor while standing in front of it and it went to power. His wife, seeing it was going over on the pilot, tried to stop the motor by its cage. She pushed on a section of the cage between its radial arms and the netting let it go into the prop.

Launching in the presence of others must be minimized. Running into a spectator who gets hit by the prop is our worst nightmare and it has happened. Also, there is a possibility that simply falling could cause the motor/prop to flex in such a way as to break, sending prop shards into spectators. Keep the spectators well clear of your launch path. 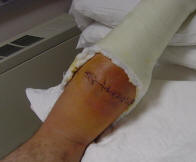 You wouldn’t think this could happen. During launch the pilot somehow got his calf muscle into the prop while making large strides.

Ideally this would be impossible but, until manufacturers improve protection, it’s up to the pilot. Make sure the frame is hiked up high and that there is protection from the prop. 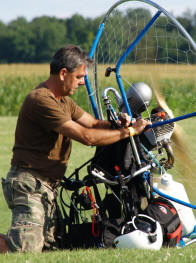 If You must hold the frame above the thrustline. Otherwise, a thrusting motor will want to come over the top of your hold point. Always be in a position, as this pilot is, to hold back the motor at power.

Always check the throttle at the carb before starting. If you ever see me skip this step, feel free to remind me how foolish that was.

Having a bar across the frame higher up would improve pilot protection by offering leverage as a hand hold and provide a place to brace against a thrusting motor. There is protection against the motor coming forward, though, as strong netting is used (hard to see in the picture) across that entire middle section.