Your PC is all F*ked Up 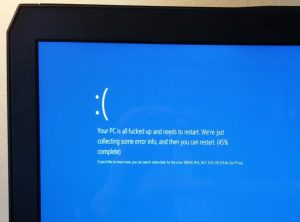 The blue screen of death after a minor revenge edit

You know it’s a bad day in computerville when this message appears. The frustrometer had pegged after losing work so I took a picture with my phone and let loose on Photoshop. A small piece of revenge, with no real effect, but it’s my tiny little scream at the man.

Whoever “the man” is.

When this happens and you been writing, or creating in some other way, it’s especially maddening. It seem you never get back the creative flow that produced whatever it was you were doing. And I only have so much to go around. But what else can a guy do but press on. Quitting only works for so long before motivation whittles away at the resting state.