2007-July 12 Here are the WAG rules that are being used. They have been used already by the Germans and Italians so changes are impossible. One thing we were unable to get changed was the need to run two tasks simultaneously. We do, in fact, have to run it that way in order for this to be a valid qualifier.

As before, there are three tasks. Fortunately, one of them is the cloverleaf which many pilots are already familiar with, at least how its flown. The dimensions may be different so check out the graphic before setting up your own course.

You can ship your motor to the following address:

All the tasks are flown against another pilot. Both pilots start on the launch deck when a flag is thrown and the first to complete gains a small advantage since his race mate is penalized 5 seconds. What constitutes the finish of a task varies and is described below.

When asked about what to do if one pilot is left flying solo, the answer was that another competitor would be chosen (randomly?) to fly against the odd man out.

Four pylons (sticks normally) are arrayed in the corners of a square with 70.71 meter sides and a kicking stick in the center. It looks like the 5 dice. The task rules are the USPPA task that’s been flown many times before. Don’t touch the corner poles. You get two tries to kick the center stick when starting and when finishing the course. 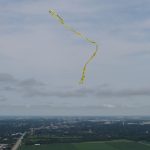 This one is completely different from anything we’ve done. You take a 15 meter (or 20 or 25) ribbon up to the altitude of your choice, let it stream behind you then let go of it completely. It starts falling. Fly around and grab it out of the air as quickly as you can. Choosing to fly with a longer ribbon improves your odds but gives some penalty.

After grabbing the ribbon, stow it (or let it go) and climb to 500 feet for a precision landing. Touch the soccer ball first or get as close as possible. You must climb high enough to fly for at least a minute, power off.

The competition organizer will chose the tape and everyone uses the same stuff. I’m practicing with 3″ caution tape of about 20 foot length—that’s way shorter than regulation, but I figured if I could get that, than the longer one would be easier to use.

The biggest challenge that the tape may bunch up and start descending faster than you are able. Yes, you could do a spiral, but that eats up altitude mighty quickly and you’re being timed. I suppose it’s still better than missing it and letting the ribbon hit ground.

I’m sure there are other ways to do this but what seemed to work best was this: after climbing to about 500 feet, throttle back (reduces prop suck), let the ribbon stream back then power up into a climb while holding the ribbon. Reduce power to idle and simultaneously let go of the ribbon. Start a moderately steep turn almost right away in your favorite direction. If all goes right you will be just below the ribbon but swinging up to it somewhat. Add power as necessary to run your body through the ribbon. Grab it with whatever body part you can muster.

If you miss, the only option is another steep turn right away so that you’re going for the ribbon before leveling out. Leveling out may cause you to climb above it.

A ribbon that descends slower makes this task easier but you don’t get to choose. If it bunches up and starts dropping quickly, you’ll be in for a challenge. About the only thing to do is fly by it (you’ll be above it) and do a spiral. But by that time you could be too low. Be extremely aware of altitude and position and obstructions, especially power lines.

1) You can see what happens when it gets on the exhaust. The ribbon is thin enough that it doesn’t do anything when it gets whacked by the prop as it did while I tried to wind it in. One time it wound up in the prop shaft but that didn’t have any noticeable effect. 2) The ribbon usually winds up below you unless a moderately aggressive turn is employed after releasing it. 3) This is the ideal position because you can use power to come up to it. Trying to fly this while taking pictures was a pain in the derriere.

Matt from western New York suggested this valuable tip: Don’t go below the ribbon. If the ribbon catches in your lines and you can’t reach it, there’s no second chance.

The course is laid out in a straight line with 1 kicking stick, 2 Pilates exercise balls of 50-60cm, 3 pylons and finally a 10 foot diameter (3 meter) circle. The pilot launches, flies to and picks up one of the two balls with his feet then slaloms the three pylons, dropping the ball in the target. He then flies back through the course, picks up the next ball, slaloms the course again dropping the next ball in the target. Lastly, he slaloms through the course and kicks the kicking stick. Time runs from first ball touch to stick kick.