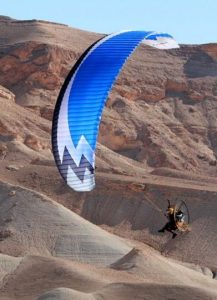 The Nucleon 27 (flat size) is an intermediate level reflex glider that is good for tooling around and maneuvering. It’s certainly less perky in handling than the smaller racing wings (plasma, viper or fusion) but will have better endurance owing to the larger area.

Most flights were done Aug 6 on a Miniplane Top 80 (55 lbs with fuel) at an inflight weight of about 225 lbs. (including wing’s 16 pounds) from 1500 feet to 1700 feet MSL and temperature was about 75°F. That really makes this glider too large for me so it’s handling will suffer.

Handling (6): When trimmed slow, handling is good for a reflex wing of this size and my light weight. A fair amount of brake pull results in a medium bank. Pressures are pretty light but the pull is quite long. Certainly you can turn it quickly, it will just take more brake travel, but then it responds nicely. Like all reflex wings, when trimmed fast, and especially with speedbar pushed, you should use tip steering since brakes are less effective and possibly destabilizing. The tip steering balls worked quite well.

In Florida, Michel Carnet was using the steering balls in conjunction with the brakes for even more effective steering. I’d forgotten to try this so I went out and flew it again just to see how that worked (and to film it). It did indeed increase the responsiveness and the ball/brake combo was easy to hold in my hands. It still requires a much longer pull than their Plasma model (which was also only a 22) but was improved. It’s probably how you would fly precision tasks.

The glider had a slight left-right oscillation under cruise or higher power. This behavior happens with some motor-wing combinations and was not enough to be bothersome. I’ve had much worse, especially on smaller wings.

I practiced doing cloverleaf turns and it definitely required more brake pull than the smaller wings, as you would expect, but was easily able to do what was necessary. I flew with trims set slightly faster than neutral, using speedbar and brakes. One thing that helped was needing less power than the Plasma.

One interesting feature is a short piece of line on the right riser that goes up to the tip steering line and can be set to continually apply some turn input. It worked as advertised. You put slide the line into a slit in a short nylon tube and it hold the prescribed amount of tip steering. I never actually used it for that purpose because torque steer is so minimal on my motor setup. There’s only one line but two setups, one per riser, so if your motor torque steers right (motor twists you left, causing a right turn) you would unhook the line and put it on the left.

Inflation (4): Like all reflex gliders I’ve tried, they just don’t come up quite as easily as most non-reflex models (Pluto, Eden). That shortcoming is easily overcome, though, by simply holding the A’s for longer and a bit more aggressively. Once you have that technique down you’ll be as successful with a reflex glider as any other. Set the trims to between 0 and 3 fast, start your runs with hands mostly back, holding only the center A’s, get the glider to billow, then pull the A’s. Gather speed while keeping up some “A” pressure and lift off. Its important to use only the inner A’s. Stay on them until you’ve accelerated.

I did reverse inflations in winds of about 4 mph. A forward would have been the preferred method but I wanted to see how hard it was to do a light-wind reverse.

As with all full reflex gliders, it shines in a stronger wind since there’s less tendency to overshoot and, even if it does, the leading edge is less inclined to tuck under.

Kiting (6): Kiting was easy and typical for a reflex glider meaning that slightly more A’s pull is required to keep it overhead in light winds.

The reflex effect is best seen while kiting. Let the trimmers out and inflate vigorously so that it overflies you some. Instead of front tucking, the trailing edge goes up and the wing descends fully open. Of course you can cause a frontal with enough provocation but it’s more likely to just drift down and come forward rather than curl over. “Semi Reflex” wings don’t exhibit this trimmed-fast front-tuck resistance nearly as strongly.

You can also see that it doesn’t like the brakes when trimmed fast. They’re not as effective and can actually destabilize the wing slightly. The tip steering lines can be used to kite with the trims full fast, a practice I highly recommend you experiment with.

If you’re willing to do these same tests, I would welcome the data. Include your all-up weight (motor, fuel, accessories, you). Although these numbers seem high, I did two tests twice just to see and I also re-flew the Plasma test and got the same numbers so I believe the testing is consistent.

Speed (9): It’s fast for a 27 m² wing and has a highly effective speed system. I’m lightly loaded so the speeds will be commensurately slower.

Here are the GPS speed readings. The initial upwind/downwind test to establishes wind speed so as to convert the remaining gps readings to airspeed. MSL altitude was 1200 feet (smooth) through the test. An initial wind determining run found that a 310 hdg kept me pointed upwind and yielded a speed of 9 mph upwind and 36 mph downwind trimmed full slow. That’s an airspeed of 22.5 mph and wind speed of 13.5 mph.

Construction (8): It’s built well with strength in all the right places and handles where you need them. When I got it the brakes were routed through both pulleys and were too long but I was able to leave them be.

Magnetic brake holders are effective and, being fabric covered, won’t get clogged with debris. A minor downside was having loose tip toggles foul up the works when they came off their keepers—it takes a moment to sort out.

Certification & Safety (7): 2010-Feb-27 It is certified as EN “C” which means that it is considered appropriate for intermediate or higher pilots.

When trimmed fast and hands off, there is good passive safety in terms of collapse resistance. But to get that you have to leave your hands off the brakes and use wingtip steering which is quite effective. Since I’m a fan of active flying, when the bumps bite, I prefer to trim slow and keep my hands on the brakes.

Overall: If you want to balance good speed with reasonable fuel consumption then this will be a good choice. Landing speeds are more forgiving than the small Plasma but top speeds are understandably less. There are a lot of handles and little lines on the risers so it’s definitely not for beginners but once you get it in flight and figure out what everything does and how to use it, you’ll like having the options. It’s made for long cross country flying and will excel at that mission.