The Force is Apco’s entry into the high-end Reflex category and they’ve done a good job. I’ll admit to having found previous Apco wings a bit more difficult to inflate and not terribly sporty handling, so I didn’t have high expectations. The Force changed all that — I was pleasantly surprised.

My clip in weight was about 200 pounds (my 145 self and 55 pound fueled Miniplane). A light wind and mid-morning thermals made for somewhat bumpy conditions in Delphi, Indiana: elevation 800 feet and temp 75°F.

The wing does feel like it may have some coating on at least the top surface but it still inflated quite well. Small size helps, as with any wing, but I tried inflating it with just the risers (no A’s) and it came up fine.

The Force incorporates typical high-end reflex risers including tip steering toggles. The magnetic clips are well implemented in a way that won’t allow clogging with iron-laced sand. Nice touch. Trimmers have sewn-in markings to identify trim settings while preventing the fabric from slipping. Tip toggles like to tangle in things if they come unclipped, even more than brakes. 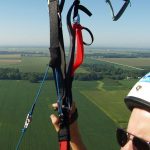 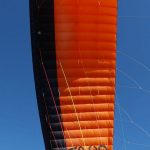 Handling (5 with just brakes, 8 with brakes and tip toggles): Brake pressures were fairly high but the tip steering toggles, which could easily be held concurrently with brakes, made it a different, and much better, experience. Tip steering was very effective, nearly as good as the Dudek Plasma, in both full accelerated (trims out, full speedbar) and slow. Like several of these type wings I’ve flown, the tip steering actually cups the outboard trailing edge.

With the brakes alone it’s not as divey as some others making it want to turn flatter. But with both toggles and brakes it dives nice–a feature greatly appreciated by anyone who enjoys steepish maneuvering. And the tip toggles are easy to reach, even while holding the brake.

Inflation (7): Easy to inflate which is especially good considering it’s a reflex. Being small helps since it doesn’t pull back as hard. This is an improvement over some previous Apco models I’ve tried so its nice to see. It was easy to inflate the wing with moderate pull on just the risers with no A’s.

Efficiency (-): It’s hard to tell without hard data points but I had enormous energy on landing, being able to come in hands-up, withOUT swooping, and climb back up several feet after skimming the ground. It seems reasonably efficient.

Speed (-): No hard data points but it sure felt fast when I pushed out full bar and with a large range. It didn’t seem as great a range as the Plasma or Nucleon (on which I’ve spent some time) but it ought to be darn close.

One interesting thing (check your manual in case this changes) is that, according to South Africa distributor Keith Pickersgill, there is no limit on using speedbar even with the trimmers slow. Most reflex wings I’ve encountered *DO* recommend against this behavior so be careful. And the manual does not prohibit using brakes while trimmed fast but recommends to only do so from a safe altitude. I’d want a reserve.

Construction (8): Seems well built but not overdone or excessively heavy.

Certification & Safety (5): I didn’t put anything about his in my notes so you’ll have to check the manufacturer.

Overall (8): I was impressed mostly with the improvements and what turns out to be a great combination of characteristics. They’ve improved the inflation and handling characteristics dramatically from previous Apco’s that I’ve flown. For an overall wing that goes fast, this is probably a pretty good bet. Although a few schools are using it for new pilots, I think it’s more appropriate for a solid PPG2 or higher, mainly so as to not complicate matters with the additional toggles and limitations. But for those pilots, it’s a good choice — up there with other top reflex models.