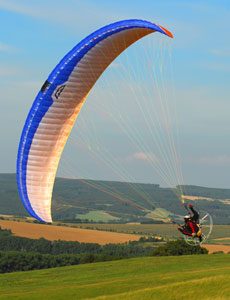 I’ve flown the Velvet before but never this size and boy what a difference size makes. in this case, great things come in small packages, I loved the handling. For anyone that likes carving about in 3-D, the Velvet is a good choice.

The Velvet is advertised as a semi-reflex wing but I can’t really tell much difference from a standard glider. At least it feels and flies more like a standard glider than what I think of as a reflex.

It has typical lightweight MacPara Construction and comes up easily like their others. I frequently grouse about the magnetic clips that get clogged with metalic sand but this wing also had velcro clips. At least until the velcro gets gunky, this is a great solution. As with the rest of their gliders I’ve flown, it has split A’s.

Handling (7 trim in, 7 trim out): Handling is conventional and crisp with trimmers in or out. There is no tip steering nor is any needed. It takes more pressure than the Spice but probably less than an Eden. My favorite characteristic was how well it would yaw into a dive if you wanted. Again, it’s easy to turn flat just by applying appropriate outside brake, but it’s nice to dive when you want it to.

Inflation (8): Comes up quite easily, more than you would expect of a glider with much reflex. Being small made it that much easier.

Efficiency (7): My brief test did not get to include GPS data with speeds and sink rates so I don’t have any hard data here. It felt very efficient, though, judging from the power required and energy on landing. Quite unlike the Muse (one of MacPdara’s beginner wings), which leaves very little energy for flaring, this had a LOT.

Speed: There’s not a long trimmer range so speed will probably be like a conventional paraglider of similar size. I’ll defer to the maker’s numbers here.

Certification & Safety: It is certified as EN-D meaning that it’s appropriate for high-end PPG2 or PPG3 pilots. It won’t have the passive collapse resistance of a reflex glider so you should be comfortable with active flying before taking it out on the dance floor of thermally air.

Overall: Loved flying the Velvet, especially this size. For good handling with decent speed but without the complication of a full reflex, this seems like a great choice.