Parajet continues to come up with new, innovative gear and the Rotron is a prime example. Their new flagship is easily the most powerful paramotor I’ve yet flown and also the first one I was unwilling to go full power on. They’ve done a remarkable job, I have to say, engineering something light enough for foot launch but with huge thrust.

The flight was done just below sea level in light winds, at about 70°F, with me weighing in at 143 pounds on my MacPara Spice 22.

The Rotron’s 3-blade composite prop carved out the better part of a 50 inch (or so) cage. 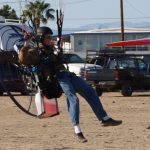 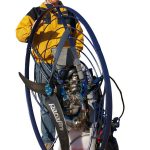 Russ Bateman beside his Parajet with Rotron 294

Weight: It’s not the heaviest machine I’ve flown but it’s close. Like most low attachment harnesses, you better have the shoulder straps cinched way up to prevent it from hanging uncomfortably low. And the seat must be flat against the frame. With that done, it’s decent to walk around, considering the heft, but don’t expect to foxtrot—with fuel she was reportedly over 90 pounds.

The weight is reasonably balanced which helps quite a bit.

Harness & Suspension: The harness is pretty typical of low hook-in, swing-arm systems, but with one important and simple difference: both risers hook in to a small aluminum riser offset. It’s purpose is to move the risers right of the thrust line which helps offset torque twist. Most low hook-in machines use a riser offset on only one side, and that helps, but doing it on both sides moves the centerline even more which increases the effect.

There is also an anti torque strap but, on weight shift machines, they’re not very useful since they reduce weight shift authority. Plus, such straps work mostly by reducing the weight-shift effect of torque which is a minimal part of torque’s effect. It’s the redirected thrust that gets pilots in trouble and that’s what offset thrust minimizes.

Starting (-): E-starting was push-button easy. I did put it on my back first since I could. It cranks fast and started after about 7 props through compression. Needless to say, if this beast starts unexpectedly and it goes to power, look out.

The throttle is a DK style with the trigger coming down from its end. That’s different than what most pilots are used to but seems just as comfortable. The kill switch was readily accessible and in a logical place.

Ground Handling & Kiting: It’s typical for a heavier, low hook-in machine. In a stronger wind the wing’s pull will want to make you bend over backwards due to the geometry of its pull and weight of the motor. That’s not terribly comfortable

Launch: This is the V8 of paramotoring. A little blip of throttle will make you blip the other way. Get off kilter with blipping the throttle and you’ll be dancing in the dirt. Ease on some gas and hold it, make sure you’re taking straight with the wing and go to a quarter power to lift off. Concentrate on getting a constant throttle setting before committing to flight. Pouring on the coals quickly will make launch dicey.

Torque is remarkably well handled for its thrust. No doubt that’s the double riser offset. Once you’re seated it’s quite comfy.

Power forwards would be easy and straightforward–the cage is plenty strong and there is nothing for lines to snag on.

Getting into the seat required reaching down with both hands but was easy enough. I probably could have made it easier by tweaking the straps because I’ve gotten into the seat with just one hand on these machines. I may have done that on my second flight, in fact.

Climbout (-): There is none better. At least as of Feb, 2010. Full power was something I didn’t get to experience because the climb angle was so steep I worried about what weird aerodynamics awaited me. I’ve had other machines that were close, or that I couldn’t go to full power because of torque twist, but this was just more thrust than was appropriate for my 145 pounds. If I were launching from 9000 feet, however, I’d be happy to have it.

Flight: Flying was quite comfortable with plenty of adjustments in the harness.

Weight Shift: Weight shift is about the same as many other low attachment machines with moving arms – about 6 inches. It is accomplished my tilting your hips, dipping toward the turn.

Torque: Torque was extremely well managed but I wouldn’t recommend this for beginners whatsoever. On the ground, it has so much power that the simple torque of throttle up would be distracting. This is definitely a pilot’s second machine and I’d recommend being a high PPG2 or PPG3.

Thrust (-): It’s the pushiest. See climb rate — it’s quite impressive. They claim over 200 pounds of thrust and I easily believe the claim. I’ve flown Simonini 202’s and MZ 43’s from here with great climb rates, but this definitely has more oomph.

Endurance (-): If you can heft the weight, this will keep you aloft for a long time. In my brief flight I didn’t check burn but the tank is huge — almost 5 gallons.

Vibration: There was a bit more vibration than I’d prefer–possibly just a matter of insufficient padding. That’s easy to add so I suspect it would be an easy fix.

Sound: This was a surprise, the Rotron is quiet for its thrust, especially given the seemingly minimal muffling system. And forget an electronic DB meter — it doesn’t yet do justice to what humans consider loud. The direct drive screamers can register the same DB meter readings as geared models but the humans are all complaining about the high-rpm screamers.

Safety: One thing that worries me is how easy it would be to get a hand through the large openings. I realize they do this for appearance and drag reduction but it does increase hand/prop injury potential. Otherwise, it is standard in terms of safety but is certainly not for new pilots, especially with the big prop. They have a smaller, lighter weight model that would probably be more appropriate although I didn’t get to try it.

Construction: It is extremely well built. There’s hardly a straight line on the thing which is part of what it makes so good-looking. The welds, finish and components seemed well put together and tied off. It should run cool given the water cooling system.

Reparability: everything was easy enough to get to but, having a water cooling system, means that you’ll have a bit more to look after.. Time will have to pass to tell whether or not the engine, a brand new design, will be reliable although it’s based on a proven model.

Transport: Transporting in a car or truck will be great but breaking down for air transport will be a bigger deal.

Cost: Not surprisingly, being first will be pricey. It’s the BMW of paramotoring. You’re getting lots of push for the price, to be sure, but parts will be commensurately higher and, with water cooling, there are more of them. Plus, the beautiful frame, with all those curvy shapes, means that it won’t be fixed easily with stock aluminum. This is another good reason for beginners to wait until they’re less likely to fall.

Overall: I was extremely pleased and a bit surprised. The power I expected, the well-implemented torque management and quiet running were pleasant plusses. This is a polished machine that will make its experienced owner proud.