I tried this glider in Florida and loved it. I liked it as much as the Katana but have a lot of experience on small Pluto’s larger sibling, the Pluto XS (20 m flat, 16.8 m projected), which is what I competed with at the 2009 World Air Games. It treated me well,, never once tip-collapsing even at fast trim, on full speedbar, through countless cloverleafs. 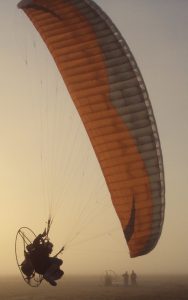 The bigger brother to what I reviewed.

Handling (8): It’s a smaller, sportier version of the Pluto whose handling I already liked. Not as crisp as a similar-sized Spice would be but it certainly does what you want and is likely more forgiving than the Spice. The Katana my dive just a bit more but it’s also smaller and, for my flying, I can certainly get it as steep as I want as quickly as I want.

Trimmers slow or fast really doesn’t matter much, the handling is awesome.

Inflation (9): Small wings shine here, coming up brilliantly easily. And there’s almost no tendency to hang back so even if you get a bit slow it’s pretty forgiving. The tradeofff is that I suspect it’s slightly more susceptible to front tucks, much like how the MacPara’s come up easily but must be dampened slightly more than others.

Risers:  The 4 riser system is identical to the Pluto as best I can tell with magnetic clips. These are what beach flyers in CA hate because they clog with iron-rich sand. But they’re fine for grass and regular sand.

Efficiency: Same good efficiency as the Pluto, maybe a bit better although it’s hard to say since the one I flew was brand new and the one I normally fly (Tim Kaiser’s) is a bit tired.

Speed: You’re way overloaded so she moves right along. I’ll get some speed measurements next time in FL. I just ordered a Garmin Foretrex 401 for the purpose and will add speed and sink rate numbers once I get the chance. Not surprisingly I zipped right on by pilots flying more normal sized wings.

The design is not particularly fast nor is the trimmer range long. The speedbar’s effect is average but I’ll await speed tests to really tell.

Construction: Looks good. The risers are the same as the larger wings. Speedbar and a short trimmer range are standard.

One interesting option on the glider is a Mylar top surface. This is basically a thinner version of the material used in leading edge reinforcement. It’s impervious to water (and I presume air) which should be good on dewy mornings. It does add weight but doesn’t absorb water so it might be a good tradeoff. I haven’t flown the Mylar enough to comment but it makes sense.

Certification & Safety: It’s a good start the larger size is certified EN B, but only at weights that are nearly impossibly light. The Max weight listed for the larger sized XS, a 20.1 m� glider, is 70 kg (154 pounds). A hundred pound pilot with a nearly empty Miniplane would barely be under the maximum. So basically, like all these small wings, you’re pretty much on your own.

Overall: It’s an absolute rush to fly something this dynamic. The Katana, Bobcat (which I haven’t flown with a motor) and Speed Flying wings are probably a bit more sporty but for a highly experienced PPG3 level pilot stepping up to a small wing, this is a great way to do it.