I’ve proposed a slight change to the scoring method employed by the FAI. Their scoring is based on running lots of tasks many times. The winner of each task is awarded a huge benefit which can double his score. But in this event, where the task is one of only 4, that would be an unfair advantage. So the method that I’ve proposed is a more linear progression of points to the best times and makes sure that you have to get the sticks.

Here is the spreadsheet to try. It only allows 5 pilots but you can game it with different numbers of points.

First for me since Italy

It looks like I’ll competing for the first time since Italy. I couldn’t fly at the Paratoys event since I ran it, but now Eric Dufour will play Competition Director. John Black is the driving force of both this competition and the event, a rather amazing second running of the public beach Fly-in near Panama City, FL.

Having Eric as comp directly means another thing: someone else is gonna win! Eric is the USA’s winningest pilot and, after seeing his Paratoys cloverleaf, he would have won that, too. But he’s not competing (honoring a promise to his wife). Plus, the entire judge team is exquisite. CC Moisant is sharing the Judging responsibility with Eric’s wife, Elisabeth who, besides being skill pilots, are extremely dedicated to being accurate and fair. That’s what we need. I’ve worked with them as an organizer and competitor, (been DQ’d by them, too), and have always been impressed by their drive.

If everything goes right, this will be the largest competition we’ve ever had. My hat is off to John Black for stepping up to a very large plate. Hopefully he won’t get indigestion

Since competitions are weighted (the more competitors, the more points they’re worth), this event may decide the U.S. National Champion. However, points are additive for two events. So someone who competed at Paratoys will have the greatest chance of winning the U.S. Title by also competing here. With so few competitions that doesn’t seem fair because it favors a pilot who can travel over one who can’t. But how else to deal with it? As with many other sport’s competition series, that’s just how the ball drops. The intent is to establish consistency so that the cream rises in scoring.

I’m helping set up the thing but will have no part in running it other than whatever they ask me to do. I’ll gladly offer advice to anyone who wants it and we plan on giving a thorough briefing beforehand so pilots can know about strategies.

There will be a practice, probably on Thursday or Friday and possibly followed by a run of the event. There may be another running of the event on another day and then the pilot’s best one-day score is used. The scores are not mixed and matched. You can choose either day one or two. That’s to reward consistency. Or the scores may be averaged but whatever method used will be determined before it starts so as to avoid favoring any one competitor.

No set schedule has been made although one possibility is:

1100am briefing and check of pilot registration

1230 judges brief and go over what transpired with pilots then the real thing.

We’ll fly the same tasks as before with one major change: instead of a cloverleaf, we’re doing the Japanese Slalom which makes more sense for a beach site. I’ll get a description of the task along with strategies up shortly. Along with 100 other things to do.

Get your wing situated, wall built (if applicable) and, once cleared to launch, do so without letting the wing touch down. If it does, or you abort, reset and try again. You simply get fewer points if a launch is started then the wing touches down again.

If it’s light wind, you’ll be better served by doing a forward since, if you try a light wind reverse and have the wing come up then down several times, that counts against you.

The purpose of this is to reward accurate control at both maximum and minimum speeds. It’s simple–fly a straight through the Japanese Slalom in-line sticks as slow as you can then come around and do the same thing as fast as you can. You’re  timed on each run and the highest ratio scores best.

Note that you cannot be observed by the judges to be doing any S-turning during the slow part of the course. Normal corrections for turbulence are obviously OK but don’t try intentionally S-turning. There’s not much room for it, anyway, since the kicking sticks are only 50 meters apart.

A fast wing is penalized because a 10 mph difference in speed will score a higher ratio at slower speeds. 20/30 isn’t as high a ratio as 20/10.

Part of why we use this task is to reward slow wings which otherwise struggle in the slalom race. Don’t put too much emphasis on it because this task doesn’t for much as the slalom or landing.

Three 2-meter tall sticks are laid out in a straight line 50 meters apart from each other, arrayed down the beach. Then another is placed 50 meters inland (or a bit less depending on room available) from the center stick.

Time starts with the first kick of stick one and ends with the last kick (see diagram).

The judges must see you clearly either hit a stick (with your body or paramotor) or go around it as appropriate. Hitting the stick with your lines does not count. Touching anything other than the sticks is disqualifying. I’d like to see this rule change to: “being unable to complete the task for any reason scores 0” since determining if a pilot touched, when he may have barely done so, is difficult to judge. We’ll see.

You’ve got two attempts to kick the first and last sticks and only one attempt at every other stick. So if you miss a stick, other than the first or last kick, don’t go back and try to hit it.

This is the international scoring method. It will be adjusted to fit USPPA’s weighting and that spreadsheet will be publicized so pilots can game the thing. For one thing, how the tasks are weighted might affect your choice of wings.

N = number of targets kicked or passed correctly. Flying in the wrong order will result in a big penalty since you’ll only get credit for those done in the right order.

I know this looks unduly complicated but the point is to make it fair and, unfortunately, there’s more to that than meets the eye. This is what FAI came up with and, after playing around with various scoring methods, it’s pretty good.

Climb up to 500 feet, shut off your motor, do at least one FULL 360 degree turn so the judges can see it, then land on the target AND STOP. Obviously you get more points for closer touchdowns. But there is a penalty for the pilot who travels a long way after touching. So among two pilots who nail it, the one who travels LESS does better.

The touchdown point is considered the FIRST foot that touches. If both feet touch at the same time, and one is on the target, you’ve scored a bullseye. If neither foot hits the target (a Frisbee or similar) then the farthest point on the farthest foot is used. If your feet go touch – touch, separated by a half-second (such that it’s obvious to the judges), then it’s the first touch that counts.

This stuff really is a lot of fun. Yes pilots are competitive but we’ve always had a great group and lots of war stories afterwards. If you’re a PPG2 level pilot with at least 50 flights, you should consider entering. It’s only $20 (advance) or $30 and a USPPA membership if you’re not already a member. I heartily recommend it.

This is the best possible combination of judges you could ever want and it will be run as fair as humanly possible. One requirement is that competitors are NOT allowed to approach the judges while the competition is running. And remember, they’re doing this as volunteers, they’re doing it for you, to the best of their ability, so be courteous. Hey, I’ve had disagreements and have even been DQ’d by one of these folks (I’ll not mention any names!) but recognize that they’re calling the shots like they see them. And I REALLY appreciate their willingness to sacrifice time for our benefit. A word of appreciation goes a long way (but it won’t improve your score). 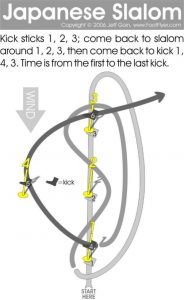 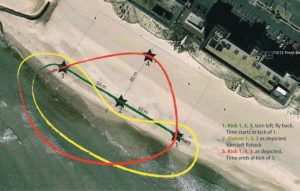 1. This is a possible layout at Beach Blast. The course is slightly non-standard to accommodate the beach dimensions. Given that some of the flight will be necessarily over water, pilots will have to be extra careful about pushing it.

2. Sticks are 50 meters (164 ft.) away from each other. In this depiction, the water will be on your right. Stick 4 will be placed away from the water to keep pilots reasonably inland but there’s the possibility of going into the water so be extremely careful!

Yes, there’s risk, but you still largely choose how much. Although there is over-water flying, you can climb up before turning, at least high enough to turn back towards the land in case of engine failure.

Another big risk reduction would be having an auto-inflating floatation device (like the Agama) on your paramotor. It installs with nothing more than Velcro.

We accept some amount of risk in every flight–we just have to minimize it as best we can with whatever tools and techniques are available.

The course is depicted with left turns. If the winds are out o the east, it will be flown as a mirror image with right turns and the pilot is required to turn in these directions. The turn direction is dictated by by the location and wind.

As depicted it favors motors with geared redrives but if the wind has an easterly component, turns will be to the right favoring motors with belt drives. This is really a small difference because this type of course favors powerful motors anyway since they allow steeper banks and smaller wings.