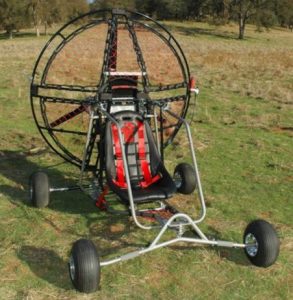 Paratoys has made its name on building decent quality machines at an affordable price. This new machine marks a departure from that succesful formula by virtue of being at the high end of its market in both price and quality. There are several decent 4-stroke air-cooled quads on the market but so far they use less expensive, simpler, but less powerful engines. This machine employs a a water cooled four-stroke that generates very good thrust for its weight.

The quad cart was very comfortable and has quad ground stability which is extremely beneficial for newer pilots who may let the wing get off centered before lifting.

I flew my 145 pound self from the Salton Sea at about 65°F with a very light wind using a Paratoys 25 wing.

Weight: I didn’t weight the machine but either the thrust was extremely high or the weight was very low  given the acceleration and performance. It’s obviously gonna be heavier since 4-strokes weight more, but they’ve worked at keeping it light to improve climb.

Harness & Suspension: The sport-car like seat had a 4-point harness and was very comfortable. It’s easy to adjust the hang points for pilots of different weights.

Starting (-): Electric start rocks. The manufacturer said it was important to let it warm up to a certain temperature before flight which I did. Make sure the cart is pulled forward against the lines so there’s no slack. Just after I started, well before I was ready to fly, some wind combined with the prop blast and blew some lines into the prop. I’ve never even seen that happen. There is plenty of cage clearance in normal circumstances but it obviously doesn’t take much. Thankfully, the prop was fine but my wing need some attention from Michelle Daniele (paramotorCity.com).

Ground Handling & Kiting (-): Quads have the best ground handling of any wheeled machine I’ve flown or watched so far. I’m not willing to do some of what the manufacturers do to demonstrate stability but, having watched botched launches where the cart just slid instead of toppled, I’m convinced. Mind you, it’s STILL POSSIBLE to flip these things, it’s just way less likely.

You can do a reverse but it’s hard because the over-shoulder bars are in the way. But few people bother with doing that very difficult maneuver so it’s hardly an issue.

For the standard forward inflation everything is within easy reach. This one didn’t have A-assists but they would be brainlessly easy to add.

Launch (-): Easy, standard. The motor is angled mostly level so the prop blast does get to the wing but not so much that the wing billows up. So acceleration was easily begun.

Climbout (-): Great. This is where you’ll notice the plentiful power.

Flight (-): Flying was easy and unimpeded. I don’t remember having any difficulty getting to any controls. As with any machine, different settings and risers setups can adversely affect how easily you reach the brakes. There was no speedsystem setup that I saw nor is it commonly used on carts but there’s no reason why it couldn’t be rigged.

Throttle response was perfect. Smooth, rapid, and plentiful with no hesitation or dead spots. I did find that the throttle lets your hand ride up against the strap ring which gets uncomfortable after a while. It would be nice if there was a lip on the throttle that your hand would contact instead. I’ve noticed this on my foot-launched BlackHawk 172, too. Not a biggie, obviously, but a nice-to-have.

Weight Shift (-) Didn’t even try. You may be able to get an inch or so but it would take leaning over quite a bit..

Torque (-): I did notice some torque twist on climbout but it’s pretty limited, less than average probably because of the higher weight. As with most carts, it’s not a problem. 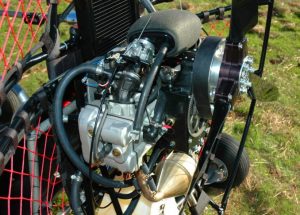 Thrust (-): I don’t know the number but the climb rate was brisk so, given the 4-stroke weight, it must be pretty good..

Endurance (-): Here’s the other place 4-stroke pilots win. Not only do the relatively sip fuel, but they do NOT use expensive oil. No more mixing gas.

Vibration (-): Didn’t notice so I would call it average to probably better than average.

Sound (-): Love the sound.  But then I’ve come from an airplane background which all get pulled around behind four-stroking powerplants. It sounds more like a decently muted lawn mower than a buzzing chainsaw.

Safety (-): Should be good. The over shoulder bars should keep lines from coming under the pilots neck and the paramotor frame should provide good head protection in a rollover. A stout 4-pount harness, if snugged up properly, will keep you in place during unplanned groudobatics.

Construction (-): The welds looked very nicely done and attention was paid to details. Paratoys andParacruiser have a lot of years with this basic Low-Boy frame and it seems to hold up quite well.

Reparability (-): Average.. The axles are straight fiberglass so those would be easy to replace.

Transport (-): Should fit in the back of a pickup truck if you take the wheels off. You’d enjoy having a trailer.

Overall: A great machine for someone looking at 4-stroke wheeled flying who doesn’t mind paying extra for the benefit of more thrust.