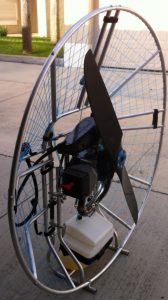 Ray McMahon is known mostly for importing Dudek wings but he also imports the Minari 180 F1-AE engine and offers it on his own Skybolt-based paramotor frame. The Skybolt is a plans-built paramotor that he has modified slightly. The frame buys buildability with a extra few pounds of weight by using techniques that require nothing more specialized than bending tube. Connections primarily use bolts (thus the name Skybolt) which avoids welding.

I got to try his demo machine at the Palm Bay fly-in with about a 3 mph wind, 72 degrees, near sea level and at a weight of about 138 lbs on my Ozone Viper 18 wing.

Weight: It’s empty weight is about 62 pounds without fuel according to the manufacturer.

Harness & Suspension: The Nirvana harness was quite comfy on the ground but had an anti-torque strap that required clipping in separately. I’ve found these to be marginally effective since they primarily reduce the weight shift portion of torque’s effect which doesn’t actually cause much problem. Plus, it’s something else that must be connected leaving the possibility of being forgotten and I’m not sure if it can get to the prop.

It is a harness attached high hook-in system with pivoting arms for weight shift. The anti-torque strap must be loosened to get effective weight shift.

Starting (-): The handle was conveniently located above the pilot’s shoulder which makes airstart possible although I didn’t try. I suspect, given the motor’s size, that you may need some pretty good arms although it did start easily.

Ground Handling & Kiting (-): A bit better than average here for the weight: the seat folds tightly up against the back and, by hiking up the motor, I was able to make it easily manageable for kiting but, at this weight, you wouldn’t want to do it for long.

Launch (-): The metal hoop makes lines ride effortlessly up the cage rim during forwards which made my partial power forward easy. Running was unimpeded. Getting into the seat was easy but I can’t remember and may have had to use one arm to push the seat down. It was no issue.

Thrust: This machine had very rapid throttle response, possibly the best I’ve yet experienced. Hammering the throttle from idle took only about a second to reach full power. From cruise power it was half that. Power was predictable at cruise even for my lightweight self but much below cruise and it “hunts” a bit. Foot dragging or contour flying would be easy. I tested this by flying just a foot or so high in light turbulence.

Torque & Climbout (-): Nothing unusual during climb. Torque was average for the thrust. It would benefit from a bit more riser offset to counter torque twist (like most machines).

Weight Shift (-) About 5 inches of riser travel once the anti-torque strap is loosened (if used).

Torque (-): Average for the amount of thrust but I was able to fly straight on weight shift alone. I was pointed left a bit with the wing pointed right, but left weight shift could overcome the bank.

Endurance (-): Didn’t test fuel consumption but it has a large tank and, for anyone willing to heft all that fuel, you’ll enjoy a long flight.

Vibration (-): A bit more than average. At certain RPM’s my vision was slightly blurred. The manufacturer said this might be due to putting on a repaired, but not balanced, prop. It had average padding in the harness and 4 regular engine mounts.

Safety (-): The cage is stout and offers decent hand protection both for starting and in a fall. It would be difficult to install a safety ring so what you see is what you get. The start handle is well located.

The prop is a bit close to the fuel tank (maybe 4 inches?) but extends beyond the tank bottom which may make a prop strike less likely. It has moving arms like many weight shift models so, just like those, would expose the pilot’s spine to injury in some types of crashes. A free-flight style airbag would be a great addition but, as of this writing, isn’t generally available for paramotor makers. Too bad.

Construction (-): Well built with a nice finish. Lots of bolts, as you would expect, with some stout (and a bit heavy, no doubt) machined parts. The motor has average cooling.

Reparability (-): Extremely high since nearly all the parts can be built by handy, motivated pilot.