French Paramotor maker Air Conception specializes in making lightweight paramotors of which the Nitro, at 200 cc’s, is their biggest as of 2016

The machine I flew was Eric Dufour’s trainer at Valkaria Airport in light turbulence on a 24 meter Axis. I was about 145 pounds, temperature 80 degrees. It had about a 48 inch prop. 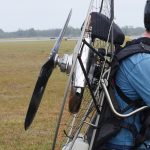 Harness & Suspension: Low hook-in system with thin harness. There appeared to be backups for gross failures but an arm failure at the hinge point would be dramatic. Like most low hook-in machines, there is a pivoting arm and we’ve learned that having a safety strap to hold that arm in place in case the pivot bolt fails would be helpful. No production machine that I’m aware of comes with this strap nor does the Nitro.

Starting: It had belt drive with no clutch (apologies for earlier confusion with a 130 that was on the field). It was positioned in a way to reach over my head but I didn’t try. Eric started it for me.

A flash starter is apparently in the works but, with many models, I frequently struggle because I don’t get enough pull. People tell me that it takes short pulls and sometimes that works but sometimes it doesn’t.

Ground Handling & Kiting: When I went to stand up it was remarkable how lightweight the thing was. My first thought was “they forgot to put an engine on it.”

Thrust: Throttle response was very sensitive in the low range. From idle, an inch of trigger throw would go to half power so it was a bit hard to meter low-to mid power settings. Max thrust was between a typical 125 cc sized machine and 185 cc Moster.

Launch: It was windy enough to do a reverse and, being so lightweight, that was sweet. You could do a low power forward but the single hoop cage suggests being careful. Lines would slide up easily with nothing to snag on the smooth titanium hoop. Getting into the seat was intuitive and required no special actions.

Climbout & Torque: This is the best managed torque of any Air Conception units. It’s slightly better than average. Climb rate was good, it felt like about 130-140 pounds of thrust at full power but that’s give or take probably 15 pounds.

Flight & Weight Shift: Flying the machine was natural without me hitting anything on the frame with my arms. Throttle response was very sensitive in the low end but I was still able to do a foot drag in mildly bumpy conditions with no problem. It will just take some getting used to. Weight shift is exquisite, among the best I’ve flown. Loose and easy.

There is a pronounced fore/aft tilt with power application, reminiscent of early Pap units.

Vibration (-): Vibration was average — not enough to blur my vision at any point. The thin harness allowed more vibration to reach my back.

Sound (-): It was average to slightly above average loudness for the power.

Safety: Like most minimalist lightweight machines there are sacrifices. A single hoop means the prop sticks out the back, and hand protection between radial arms is minimal–the safety ring would do it a world of good here.

One important safety feature is prop clearance from the fuel tank. Titanium seems to be more likely to create sparks with a carbon fibre prop so a tank rupture in a minor crash could cause a fire. As you see from the picture at left they have done a nice job of creating a large gap from the prop, making such a rupture way less likely.

Titanium and carbon fibre are used extensively for weight savings so repairs will depend on how well you work with these materials. It looked well built and was being used in a school environment which is pretty rough on machines. Shaving weight usually means strength is sacrificed SOMEWHERE but they seem to have a pretty good grasp on where.

Transport: For one thing, you’ll love lifting it! I didn’t see it disassembled so don’t know how it compares there.

Overall & More Info: What a great machine for anyone wanting super lightweight. It’s probably good for pilots up to about 220 pounds, less for launching from high elevations, of course.