I had owned and competed with an Ozone Viper 1 for at least 4 years before doing this review. I bought the Viper 1 even though a later model was out because Mathieu Rouanet had been competing on it successfully, without deflations, and I wanted something well tested. When the Viper 3 came out it felt more difficult to kite in turbulent conditions which gave me pause. Mind you, when I flew 3 in that very same turbulence it did fine with nary a tip tuck so I realize that the kiting test is not a direct analog for turbulence handling, but it’s the best I’ve got. 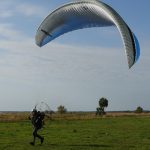 Camil launching Viper 4 that started to fall back 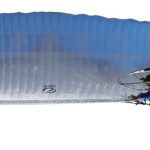 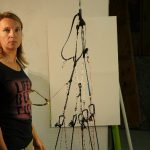 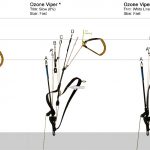 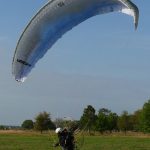 I had a chance to kite the Viper 4 in turbulent conditions (not as bad as when I kited the 3) and had no problems. Launching and flying it was a dream. They shouldn’t be very different since I’m told that the 4 is essentially the same as the 3 except for lighter weight fabric on the bottom and slightly different risers.

This one was a production prototype that I flew several times and really liked, especially with well-adjusted 2-D steering. It felt similar to the Snake, another wing in this class that I really like.

I really liked the handling in 2-D mode. For one things, when you first pull brake, only the tip engages. That’s good because, if you forget and wind up pulling the toggles while fully accelerated, you initially only pull the tip steering lines. This is how the Snake that I flew is setup.

When trimmed slow, using the main brakes like any other wing provides nimble response. Pulling a toggle down like this engages both tip and main brakes in good balance. Sweet turns result. When trimmed fast and/or accelerated fast the tip steering is VERY effective. In 2-D mode you just pull down up to about 6 inches to only engage the tips. That’s good because it means the default action (pulling the brake toggle down) is OK, even at full speed. Just don’t go more than about 6 inches unless you know exactly what you’re doing. Pulling outward only activates main brake. I don’t use this (pulling outward) because I can’t tell the difference from just pulling down. The idea is probably that it lets you fly slower but with less drag since the tips aren’t pulled in, possibly an advantage in some efficiency tasks.

Inflation: Wonderful. Lighter weight fabric lets it rise that much easier in no wind. It will still fall back if you don’t accelerate but less so than its predecessor and many other wings for that matter. I do light wind reverses with my old model already so this rocks it. Do set the trimmers to the neutral setting, a white line, for forwards.

Risers: The 4 row, PK-equipped risers are complicated for cause and a bit different than PK riser systems. First off, the risers work to keep the wing’s semi-reflex profile (airfoil shape) the same throughout its speed range. That’s different than some wings where trimming them fast is what forms the reflex profile. Good/Bad I don’t know, it’s just a different philosophy. I would expect that, at the highest speeds, it would be slightly more likely to take folds in turbulence without pilot input.

Speed: I did not do the full speed testing. It’s a race wing, though, so you can expect it to be in the top few percent.

Certification & Safety: As with most competition paramotor wings there is no certification beyond basic load testing.

Overall: It’s the new frontier with lightweight fabric improving behavior on a high performance competitor. Some people have said that it changes the flying feel in some way but I couldn’t tell. It already handles very nice. Pilots will enjoy this tweak to a proven performer.

Below: World Champion Kamil Mankowski taking off at a Lake in Lake Wales, FL. Notice his right hand pulling brake you can see the tips and main brakes deflected. This is configured as a 2-D system. The wing should come with the ability to have either this or separate tip steering toggles.