At the Bad Apples fly-in I got to try London Ivey’s tandem trike. I flew it solo on a 16 m² Doberman. THAT was fast, but the flight did give me an idea about how the trike.

There’s a lot to like. Its Bullmax 250  was powerful enough to give me decent climb on the tiny wing so I imagine with a real tandem wing it would easily be up to hauling me and a student. It does fine with London’s “fuller frame.” 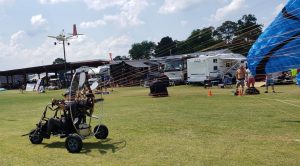 Launching solo under a Doberman 16. Photo by London Ivey

The thrust line is angled low enough that idling ruffles the laid-out wing pretty good, but not so much that the wing inflated or came up crooked. It appears it would NOT get into thrust lock. On my flight the cart moved immediately and the the wing came up normally. I would rather thrust be angled up (motor tilted forward) about 5 more degrees which would disturb the wing less. There is no adjustment although larger main tires and/or a smaller nosewheel could help.

Ergonomics is very good, at least for the instructor. The seat was comfy and allowed easy reach of everything. A strong frame allows standing on it to get in which is handy.

The nosewheel had an effective centering force and felt natural.

Lower upper frame bars (where the risers go through) make it easy to see over them. On some machines these tend to be on the horizon where you don’t want them.

I really like the lower riser connection and CG adjustment (see image below). It was VERY easy to switch from tandem to solo by choosing which hole the risers go through.

That allowed me to use the same brake line length as I do foot launching this wing. It could use more slots. Although I didn’t notice it, London mentioned that on power-up the riser moves to the aft part of it’s hole with a small clunk. Other solutions could prevent that, though, like putting something IN the opening that encases the riser.

Overhead bars provide some rollover protection but your head is above them so you’d be counting on the cage for protection in a rollover. Thankfully a pretty stout cage would likely keep your head from getting pinched by the bars. Relatively light weight (compared with 4-stroke machines) should help reduce severity, too.

Like nearly all tandem units, there is (sadly) almost no student protection from a front collision. 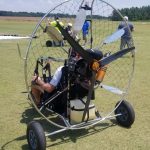 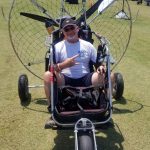 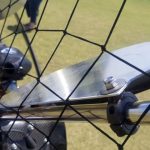 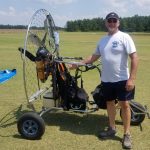 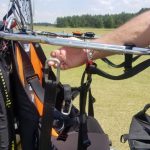