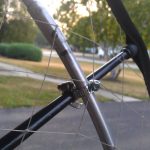 Safety ring attachment. This works but will abraid the netting.

This came up when I was considering adding a second ring to our single-hoop paramotor for hugely better hand protection. So I asked Dana Hague for an assessment of the Safety Ring’s drag, assuming that airflow would be much faster at full power due to the prop. He did not disappoint. Here it is.

First, he mentioned “Reynolds Number.” What the heck? It’s pretty simple. Imagine the dimensions of a really high performance sailplane: long and skinny wings with very little drag. It’ll have a 50+ to 1 glide ratio (50 feet forward for every foot dropped). Now make a tiny model with the same proportions but only a one inch wingspan. Imagine throwing it. How well does it glide? Horrible, of course. The reason has to do with the size of the glider relative to the size of air molecules and is reflected in Reynolds Number.

Drag of the Ring

The drag coefficient of a cylinder at the Reynolds numbers we’re talking (~20K) is around 1.0. Temperature variation between 59°F and 0°F are small enough to make no difference in the coefficient of drag (Cd), and only minor effects on air density (approx 0.5% between 60 and 100F).