Greek airline accident involving the Boeing 737 Pressurization system. | See why this was predictable

According to preliminary reports (Aviation Safety Network) a Helios Airways Boeing 737 crashed in Greece with an incapacitated crew. 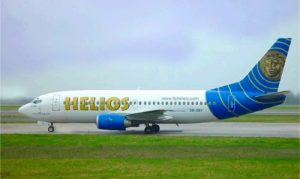 During the preflight preparations, they had inadvertently left the cabin pressurization control in MANual and, when climbing to altitude, did not recognize that the takeoff configuration warning horn they were hearing was actually the cabin altitude warning. That’s not entirely surprising—the exact same warning sound serves both purposes. This is precisely the failing that is discussed in Realistic Improvements and would have been prevented by having the warning horn be unique. Even better would be a warning that simply says “Cabin Altitude.”

A summary of the report

Maintenance had been performed on the aircraft the night before and the pressurization control knob was left in manual (see picture at right), a position that would not allow the plane to pressurize. The crew apparently failed to correct this during the pre-flight per their checklist, an easy omission and one that has happened many, many times on other flights.

During climbout, passing through 10,000 ft MSL, the cabin altitude alert sounded. The same sound that, on the ground, warns of improper takeoff configuration (trim set, flaps set, brakes released, speedbrake stowed). The aircrew was confused by this as they did not remember the horn’s dual purpose.

The plane continued to climb on autopilot and at 14,000 ft. MSL the oxygen masks deployed (as designed) to provide supplemental oxygen to the passengers. Another alarm sounded to alert the crew that there was insufficient cooling air in the avionics compartment. The cockpit voice recorder (CVR) revealed that this caused great confusion on the flight deck, not surprising since they were probably focused on why the takeoff warning horn was sounding. Plus the effects of hypoxia were likely beginning.

During this time, the captain and co-pilot discovered that they had no common language and that their English was not good enough to have a meaningful technical conversation.

The aircrew called their maintenance people in Cyprus to figure out how to shut off the alarm(s) and were told that the circuit breaker was behind the Captain’s seat. The captain got up from his seat to look for the circuit breaker, apparently ignoring the confused co-pilot.

According to officials “The captain lost consciousness first on the floor of the cockpit, followed by the co-pilot, who remained in his seat.”

The plane did what it was told and climbed on course to 34,000 ft. msl (FL 340), flew to the destination waypoint and then entered a holding pattern, where it was intercepted by the Greek fighter planes.

Boeing has issued warnings to all 737 operators to re-emphasize the dual use of the horn and importance of the correct response. But still, on every preflight check the throttle is advanced to activate and test the takeoff warning horn. The stage continues to be set.