Airspace: Where the Heavies Fly

To a paramotor, everything is heavy. But this article concentrates on where you can expect airplane traffic including airliners, to fly relative to airports.

We know to stay out of the airspace around large airports but must also be vigilant when simply nearby. The gist is that the closer you get to an airport with airplanes, the lower you’ll find airplane traffic. If you climb up high, you can be quite far from the airport and still find traffic.

Early on in my paramotoring life I was flying near my house which is 20 miles west of Chicago’s Midway airport. That’s outside their outer class C airspace and below the 3600 foot floor of O’hare’s B airspace.

While cruising fat, dumb and happy at about 3200 feet, I saw a 737 off to the east coming at me. Then it dawned on me: I’ve flown 737’s through this area near my current altitude. I quickly spiraled down to 2600′ and the jet wound up passing well above and north of me but it sure did get my attention. Afterwards, while flying 737’s on westerly departures from Midway at 3000′, I marveled at knowing how close I was to the same airspace I occupied with the PPG. Scary. 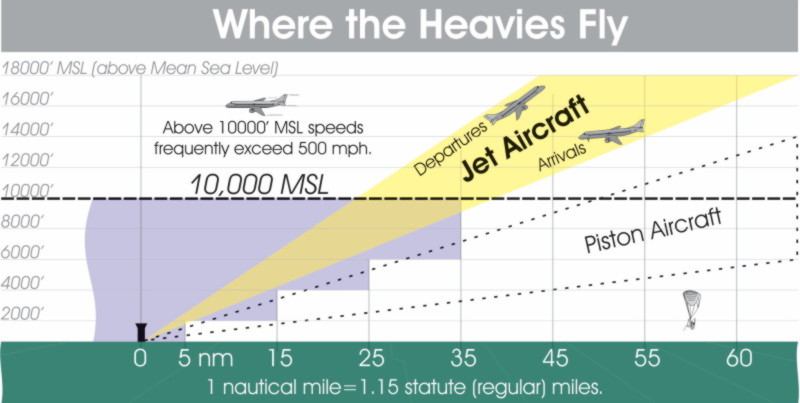 Where the heavies fly

Airplane traffic can be found anywhere, especially around busy airports, but it gets concentrated around predictable arrival and departure paths, both vertically and horizontally. On average, jets depart steeply and arrive fairly shallow—about 300 feet high per nautical mile away from the airport. That’s also about 3 miles away per 1000 feet high as shown on the graphic above.

So at 10 miles away from the airport you can expect jets to be about 3000’ (10 * 300’). If you’re flying at 10,000’ MSL, expect jets to be about 30 nm away from their landing airport. Fast aircraft spend more time at 10,000’ MSL than most other altitudes because they must slow down before going lower. Beware that controllers sometimes descend airplanes earlier or later than these figures. This is just a guide.

Now that you know where the “heavies” are most likely, it will be easier to avoid them. Good luck, we’re all counting on you!