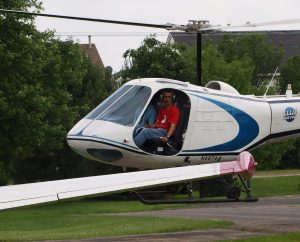 No spiders on this landing

I had paramotored up to retrieve the helicopter and was now thwapping home. On final approach to our ramp, about 300 feet high, something caught my attention. Just above me and to the left was an enormous venomous spider dropping  down its line. My hands were obviously busy keeping me upright so there wasn’t much I could do besides trying to blow it away with my mouth. That didn’t work, nor did it do my flight path much good. Spidey dropped another 6 inches, putting himself right in line with my left hand—the one working the collective and throttle.

I knew it was a Brown Recluse. I’ve seen those terrifying bite pictures and it was about to be chewing on me.

Sure enough, he descended the rest of the way and landed on the seat just beside my left hand. At least he wasn’t on my hand. Yet.

I resigned myself that getting bit, as ugly as that may be, still beat becoming a flaming ball of blades and paramotor fuel (my Fly 75 was beside me). So I concentrated on the landing.

Just before setting down I saw him ascending back up his line to the ceiling. Ahh, that’s a relief. I touched down, lowered the collective, whipped out the ship’s log and smooshed him into oblivion. Yuck.

Yeah, yeah, I’m sure he meant me no harm and all that but how am I supposed to know? It’s not like I study those things. And yes, I realize that he was not likely to have been a Brown Recluse—hey prefer cool dark places and are, not surprisingly, reclusive. But its like snakes, even though I know in my head that most aren’t poisonous, I’ve got no idea which ones are which so they all get treated as rattlers.

That was a distraction that no instructor ever reviewed!

On a Brighter Note

The paramotor flight up to retrieve Ellie (the helicopter) was magical. Taking off from my backyard was different this time but also more rewarding. I was flying the Plasma again which I’ve really grown to like for its speed and handling, but it takes more power—something my little Fly 75 has little to spare. 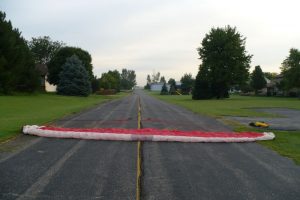 It was dead calm with a slight tailwind aloft. Inflation was slightly crooked but manageable. I had to run a bit left while staying on the A’s to get Mr. Plasma fully overhead before going to the brakes. Then with some speed I steered down the centerline and ran like the wind! At first I wasn’t sure I’d be able to get airborne at all but with just enough brake pressure, eventually I was slapping the ground and eventually labored into flight, eking out the shallowest of climbs.

It was obvious I wouldn’t be climbing above those two trees (the picture at left is looking down the same launch a couple years ago) but I knew they were staggered so I just flew a little slalom around them. That was fun anyway. I just hate subjecting to the neighbors to all that noise.

Once aloft I pulled the trimmers to full slow for a better climb and headed for my route above power lines right-of-ways and other people-free areas. It was nearly perfectly smooth. Music played in my ears—ear buds are perfect for that.

A couple hundred feet high the inversion warmed things up so, in addition to my many layers and laced up boots, I had enough to avoid freezing like I did flight back a couple weeks earlier. Being warm is key.

About half-way there I found some soccer fields to play in. They even had cones to play with. It was far more difficult to manage with such little power because I could never allow a low energy state to develop—there just wasn’t enough power, especially when going downwind. That was just another challenge, though, and enjoy it as much as flying the higher powered machines. It did take three tries to pick up the smallish cone but success under the circumstances was sweeter. I circled around to drop it back where I picked it up. No, I couldn’t get it to stand up again.

Heading further north I found a gravel walkway through the beans. That was, of course, irresistible for foot dragging but just barely—I couldn’t afford too much drag. There would be no relaunching from this narrow bean-bordered little walkway, either.

Getting closer to Gilberts, I circled around the area where I’d experienced my engine failure in Ellie several years back. Its changed quite a bit but I could still see the low spot where I had landed—it was sort of a clearing with marshy looking, but solid, grass.

Arrival over the helipad was early but Darryl’s truck was there so I knew I could land right away. But then another favorite song came on and I couldn’t resist playing over the swamp, swooping and diving, kicking choice leaves and tickling various swamp things. It was glorious. Plain glorious. Finally I saw Darryl emerge and give me the “OK, enough already, land that thing!” signal. So I did. Over the swamp, shut off, and alight.

Oh it was sweet!

I don’t know why that cross country is so much fun—more than it should be, really, but it may be that I’ve been going out on so few of them in recent times and I miss that. Just me and the machine dancing to a beat in 3D over new terrain with a mission to accomplish.

No, even the spider that later gave me a scare couldn’t take away the pure joy of that flight. It was another great example of what incredible freedom we enjoy with these things. Until next year…