I hate to say this, but paramotor training is surprisingly dangerous. Thankfully, there are ways to hugely reduce the risk. Use instructors who use embrace best practices. A big one is insistence on benign-handling beginner wings flown within their rated range. Also insist on enough tow, hill, or tandem flights to learn how to stop pendular swinging and to respond reliably to instructor commands before going solo.

Beginner wings get a bad rap: they’re slow and don’t turn well. But observation of student crashes, including two training fatalities make them look much better. Sporty handling for new pilots can be deadly!

Dynamics of our craft work against new pilots. Pull right brake and your body briefly moves slightly left as the wing banks right, pivoting around a point just above your head. That causes new pilots to pull brakes out of synch with the wing’s motion, making matters worse. If they’re on a sporty-handling ride, it can quickly devolve into Pilot Induced Oscillations (PIO’s). Properly loaded school wings make that far less likely since their response is so muted.

This has proven fatal! It has also caused many takeoff and landing accidents and is why best practices demand that new students get basic wing handling down before they’re allowed to solo under power and why they must be on the most forgiving beginner wings. 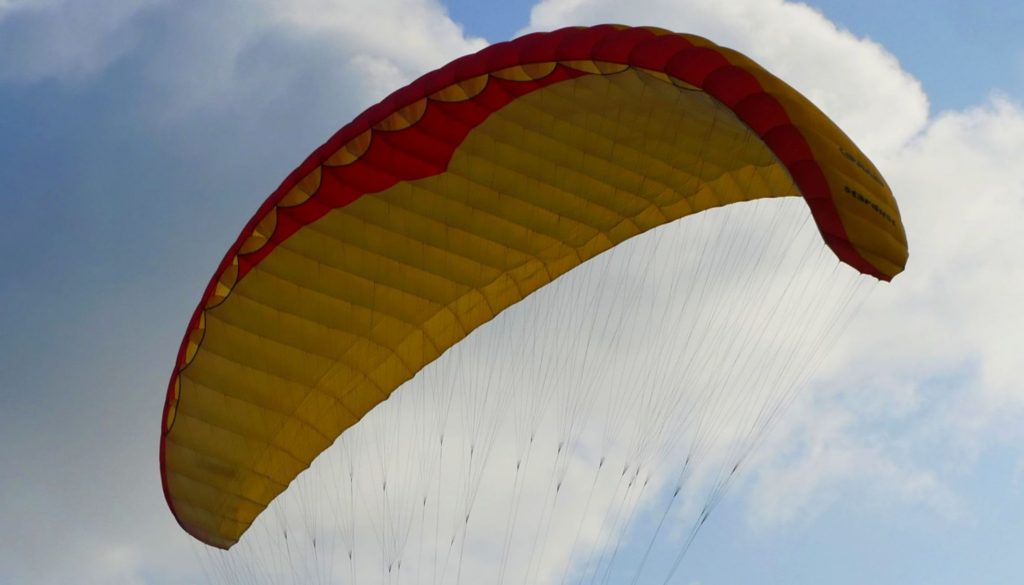 I’ve flown some “beginner” gliders, even EN-A rated models, that are still too sporty handling, especially at wing loadings above about 9 lbs/sq meter (flat). That’s not what a new pilot needs. He needs benign handling that’s extremely forgiving, that can tolerate full brake travel for several seconds without stalling or spinning. Such “school” wings help common beginner mistakes from being sentences to serious injury or death. And they must be flown withIN their rated weight range to have this forgiving behavior.

In the past my experience with true beginner wings, those with super sluggish handling, was that they were hard to inflate. The 2013 Power Atlas comes to mind. I watched some students struggling with forward inflations on one, trying to get it overhead in a 3 mph wind. That should be easy but it clearly wasn’t. Flummoxed, I asked to try it out, and sure enough, the amount of A’s required to pull it up curled the leading edge. I was able to get it overhead but it was ridiculously difficult. In a bit more wind it’s obviously easier but why make it harder? While the handling on this wing is perfect for a beginner, it’s inflation characteristics are simply unacceptable. The bummer is that this wing otherwise fits the bill as a perfect, forgiving school glider.

I recently tried out a school wing with similar handling but that was decent to inflate, the Axis Stardust (pictured above). There are others, of course, and now that I see their importance I’ll take any opportunity to review them. A key characteristic is that they must be very forgiving of brake pull. Size matters so I would prefer staying around 8 lbs/sq meter (flat) range. My motor and I weigh 205 pounds so a 25 sq meter (flat) size is about right. That will equate to about 22 sq meter projected.

To determine the appropriate size wing for you, divide your fueled weight (you & motor) by 8.5. That’s the approximate flat area of a desirable school wing. Too lightly loaded (wing too large) is equally bad so don’t go less than about 8 lbs/sq meter (flat) which risks parachutal stall and/or spins.

Of course there’s balance and yes, really good training reduces the chances of problems, but human behavior is unpredictable. I’d rather we give new entrants the best chance of survival and this is an easy first step. Once left/right pendular control is mastered THEN move into a hotter handling ride. Don’t fall for the “I wana be cool” trap. You won’t look cooler on a feeding tube or casket. Choose life.