Blowing in the Wind & Photoshopping

Doing a book with hundreds of illustrations, many involving Photoshop, meant that I’d recently gotten better at photoshop. I had to spend some of that on fun.

In May 2008, After seeing the IL paint scheme on one of our “red bellied warbirds” I had to play. Below are the results. The final approach would be to a mythical airport north of Pine Island, Florida and I somehow I don’t think my legs would be so nonchalantly crossed.

Jeff Goin in cockpit of 737 flying over Mount Hood

Apr 05, 2008 Just another day’s end in the San Francisco Bay. Of all the places for great scenery, this one is tops. You can probably figure that from the number of pictures that I include from there.

It’s tough getting shots to work well in the low light of a setting sun, doing so from an airplane is harder yet. My tiny camera’s capture doesn’t help matters most. You’ll have to use some imagination, but seeing this in motion with a pair of high quality Mark 1 eyeballs is darned spectacular. 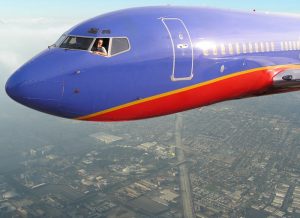 Stand Up And Be Counted

Nov 10, 2006 Every now and then a good idea comes along that deserves copying. Of course you can’t just copy its implementation but you can certainly create your own. That’s exactly what the silly, grinning fool (me) pictured above, right in the margin, did.

The idea came while reading our union rag, I saw a retirement picture of a pilot hanging out of the 737’s cockpit window while in flight. That was funny—I had to do it. Thanks Mike, my trusty First Officer, for the help.