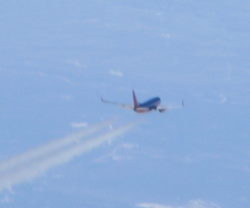 From the department of “Ridiculous things people believe”.

Jan 31, 2007 The next picture shows an SWA airplane leaving contrails. That reminded me of an interesting question I got a while back about contrails. The person pointed me to a web site that claims they are chemical dumps by the government. When I realized they weren’t joking, I about fell over.

Apparently, these bright individuals have discovered that our government is spraying a chemical cocktail, presumably to affect our behavior, using commercial airlines. Airline pilots are part of the conspiracy or, depending on what nonsense website you read, unwitting delivery boys. So that’s why we all fall so quickly in line with everything the government says!

The conspiracist websites describe how anyone who does not believe this theory is naive and already affected by the chemicals. Okaaay.

I’ll admit that there are a very few things that airline employees are not supposed to divulge, but they regard only security procedures. Rest assured, dumping thousands of pounds of chemical agent over an unsuspecting populace is not one of them! Contrails are little more than water vapor being stirred into a visible form under the right atmospheric conditions.

Mind you that I don’t doubt bona fide conspiracies take place (Watergate is one where they got caught), but “chemtrail” type claims only put their proponents in a bad light. Flat earthers, for example, must believe in a grand conspiracy where all the space companies, airlines (who point their airplanes’ internet antennas UPward), NASA, and every government now launching satellites is in on it.