Dell Schanze strikes again. This isn’t hunting, it’s torture for the simple pleasure of it. Chasing a bird for a few seconds is one thing, chasing it to kick it, and for as long as he does is reprehensible. Here is the video (up as of Apr 10, 2013). 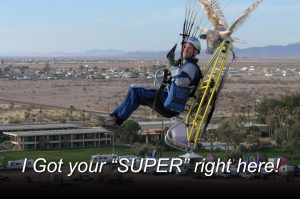 Dell Schanze’s Revenge of the Owl

This is what pilots WISH would happen! Nobody dies, the owl just gets a few good swipes in. Thanks to Nathan “Drifto” for the idea.

According to a report from Salt Lake TV Station KSL this flight was from two years ago. There’s no doubt it’s Dell. It’s got the same wing, same footware, same mangled finger, same voice, and the same flying style.

I answered some questions for Fox 13 in Salt Lake City and thought they did a good job of covering it. Here’s their report.

He may or may not have broken FAA rules but I’m told he almost certainly broke wildlife rules. Far more important is that it’s just another example of his extreme lack of empathy. Some may brush it off by saying “ah, the bird will be fine” but how can you know? How many predators chase for this long? This poor bird was at military power for nearly 7 minutes.

The point of all this is to show clearly his character. Extreme dishonesty has been his halmark — delivered with ferver in a way that otherwise observant people fall for it. Do the sport a favor and warn people away.

Also, I got an email suggesting that I did the video. Don’t I wish. I would be extremely proud to have exposed this destructive influence on our sport. I did download it before he pulled it and will hopefully get a commentary up but, rest assured, when I do, it won’t be anonymous.

Dell Denies Being the Pilot!

This shouldn’t be surprising for someone willing to say anything regardless of its truth. But Dell has denied being the pilot who chased down the hawk in spite of the evidence. In spite of the fact that snippets of conversation show that he took pride in doing so on the video. These other observations make his denial ludicrous:

1. He admits to doing it on a public posting. Even though this was probably a different event, he not only admits that he does this, he brags about it. Here was part of his message (#16287) posted by Dell:

Sweet video but I must say my launch is much smoother and cleaner than the Hawk’s:

I believe I am also the only person in the world to chase a Hawk down and catch it. A wild Hawk. So until the Hawk shows some real talent then I don’t think he can really compete with me for the title. lol. Anytime that Hawk wants another go for air superiority though then I’m his huckleberry.

2. The video was removed (see sidebar) by Dell Schanze! Given that it was helmet cam footage, that’s as damning as it gets.

Dell Schanze can be best understood as a Psychopath. I don’t even say that as an insult but an observation that can help understand his behavior.

Many pilots have chased critters but they’ve done it briefly, realizing more is potentially harmful and just plain mean. This puts the bird in peril with no concern at all. Of course a lack of empathy is a characteristic of psychopathy.

Dell Says “It Wasn’t Me”

Apr 9, 2013 I got a Facebook message today from a friend who called Dell’s business number to complain about the owl incident. Dell denied that it was him. Interestingly, sometime on Apr 9, the video was removed from YouTube due to a copyright claim by Dell Schanze. (screenshot below). Given that it was a helmet cam, that sure seems to be about as close to an admission of guilt as you can get.