Engine Out With a Twist

How do you know if your paramotor is about to quit? It’s running. Elburn, IL

Saturday was one busy day with paramotor flyin

g early and late and a hang glider trike adventure in the middle. That became my very first engine out landing in corn. Well, touchdown wasn’t *IN* the corn but there was corn involved. And let me tell you, the hang glider trike has far fewer options than a powered paraglider! 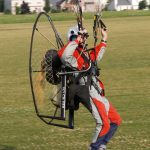 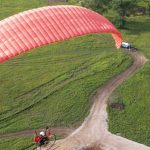 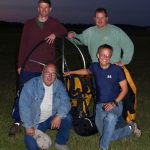 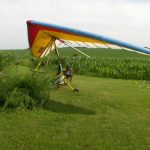 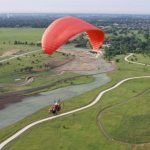 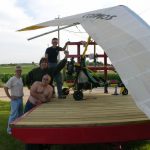 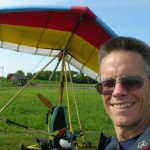 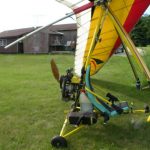 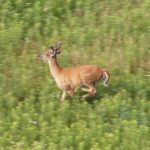 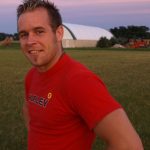 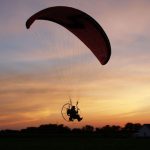 Thanks for the help Harry Rosset (my partner in the Samba), Dave Moore, Gary Brown, and Kevin Kenarski. Kaleb (red shirt) was a bonus who just came out to check what the cool kids were up to. They were flying, mostly.

The morning flight with Tim was its usual relaxing cruise around the local area. Taking in the sights and smells still renews my mind even the hundredth time. We have to be far more careful now as there are people strolling through the newly built pathways of our nearby prairie preserve. It’s not just following the letter of the law, it’s avoiding a perception of danger. So we keep our distance and fly quiet motors. I wouldn’t do this with my buzz-bomb direct drive.

After the local cruise I took out my in-line skates. Tim manned the camera and I went to work. That little adventure stands on it own.

In the afternoon I headed out to fly with Harry and got a bonus of Jeff and Pam Neilson. Jeff is a hang glider instructor and his experience would be welcome later. When I arrived the Samba was already out and had been flown by Harry. After some kibitzing it was time to launch for a little sortie over to Polo Field and around. I’d only flown the Samba once this year so it was good to get the feel back. What a nice flying machine. The polo field was vacant when I arrived so I so I kept cruising around, heading north.

One huge sod farm enroute provided some great play—I spent the whole time below 5 feet, circling and doing “wheel drags” there—I’d fly along, grass-skimming the main gear, while holding the nosewheel just above the ground. Bumpy conditions made that more challenging but it was fun and I got better with practice. Then it was up and back to the field. At a very few points I thought how an engine out would be inconvenient at best. That made me climb higher. I also decided to keep near roads instead of flying right over the corn. Both decisions proved beneficial. 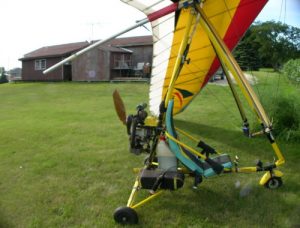 Engine Wind Up with a Yard Landing Twist

Cruising westward at about 300 feet I noticed a familiar house. It was the one I’d flown a friend of Jim Filgut’s from in Ellie (a helicopter). Cool. Sad, though. He was a terminally ill cancer patient but with the most amazing attitude. I’m sure he had his moments, who wouldn’t, but he was a pleasure to be around—more than I can say for a few who are blessed with physical health. I digress.

Not long after noticing this house, the engine revved way up as the thrust diminished and I started descending. I turned immediately to position myself for an upwind landing that ended roadside. It was obvious the belt had loosened and I played with the throttle trying to find a setting where it would grab enough to fly level. That was a waste given that I was mostly level when it happened. So I went to idle to insure any residual thrust didn’t affect my approach. Then I noticed the grassy back yard. Hmmm.

There were two areas of that yard, a larger one to the west and a piece south and east. The westerly one had trees that could have concealed wires so I opted for the known but smaller eastern one where an over or undershoot meant merely going through more corn. There would be no way to land and stop in the grass but, the thinking went, it sure would be nice to avoid dragging it through corn so I set up to touch in the corn just prior to the grass patch.

It worked. The landing was level and just prior to the grass. But the ground was inclined making for a hard touchdown. I rolled through the grass and into corn on the other side, going about 4 rows in. It was indeed easy to extricate the Samba and get it to to an open area. Boy would a powered paraglider be easier, though!

Examining the reduction drive revealed a belt tensioning bolt was broken clean off, allowing the pulleys to move closer, loosening the belt. Too bad because, while awaiting Harry, I found a place to re-launch if we could tighten the belt. Nothing doing—even if we had the bolt we’d need to extricate the original bolt’s remains. As it turns out, that may have been good because closer inspection showed a slight bend in a support bolt.

Harry, Gary, his daughter Christy and Jeff came with a big hay trailer and we strapped the Samba on to return. Thanks to everyone who helped. Jeff Neilson showed us how to remove the wing so we can get everything straightened out.

Icing on the Grass

It’s all such an adventure as long as nobody gets hurt. When we got the Samba back to Harryport, PPG pilots Dave Moore and Kevin Kanarski were there. I was originally meeting them at another nearby paramotor site when my bad bolt derailed the plan. Thankfully, there was just enough time for a last little play in the air. Dave brought a beach ball and we had a great time picking it up then dropping it. Kevin did a masterful job landing to fetch some fallen piece of his kit. It was, all-in-all, one of my most flightful days of the year.

Kaleb, pictured left, saw us flying around and was fascinated. Dave noted that he was the same way about two years ago and now, of course, we know Dave to have gone over the deep end. We answered all the usual questions and hope to start seeing Kaleb around one of the local schools soon.