While in Panama, far away from spare heads and helicoils, my spark plug came partially unscrewed. I found out when I went to remove it and encountered enormous resistance. Thankfully it didn’t blow all the way out but id did damage the threads. I could neither screw in or out. Leon Massa, of Compact Radial Engines, made two valuable suggestions that got me back in the air and prevented more damage through excessive force. 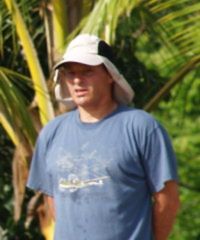 Removing the plug (or bolt)

If you try to muscle the spark plug out, it will ruin what’s left of the threads and you’ll be grounded. The cure is to wiggle the plug clockwise and counterclockwise several times then go counterclockwise a bit more. Do this repetitively. It will take many, many repetitions but will likely leave the threads damaged but useable. Try to lubricate it, if possible, with WD40 during the process. As Leon pointed out, spark plug wrenches have limited length to help prevent over tightening.

As you pull the plug out, there will tend to be aluminum shavings. Don’t let those fall into the cylinder. Taking the cylinder head off better avoids that possibility but Leon didn’t feel it was necessary. I plugged the hole then wetted a finger to press on the area and pick them up.

Hopefully you have a new spark plug. If not, you’ll need to clean out the threads of your existing plug.

Now you need to have a triangular or rectangular file. You’ll be filing two cuts into the thread edges of the spark plug so that they act like taps. Look at a tap to see what I mean.

Once cut, carefully screw the spark plug (or bolt) into the damaged threads but only turn. Then twist it out to remove any aluminum shavings. Do this 4 to 8 times until the spark plug goes in smoothly. It might be helpful to have some WD40 on the threads.

Although it will be tight and might last for quite some time, the threads are compromised and the bolt or plug may just pop out. In my case, there was a fair amount of undamaged thread.

The real fix is to install a helicoil or do some other permanent thread fix. In the case of a cylinder head, it may be valuable to just replace the head. If you opt for helicoiling a spark plug, make sure none of the steel helicoil hangs below the head.