As of November 2018, instructors can now get certified to fly tandem students with wheels, an IMMENSELY valuable training tool for our community. We MUST act responsibly to keep this ability which makes teaching paramotor’s weird pendular behavior much easier, and a student’s first powered flight much safer.

Before 2018, USPPA’s (and others) tandem exemption only applied to foot launched instruction. Flying a wheeled tandem was in violation of the sport pilot regulation, not the exemptions. Mostly that meant that, if a passenger sues, it could be shown that the instructor was breaking the law to do the flight–never good for a legal case.

We COULD do foot launch tandems. Below are ideas to allow meeting the foot launch limitation with less risk. The left is a craft that actually flew. It was created by Leon Wacker and flown by Eric Dufour and has the advantage of a front wheel to reduce the student’s chance of falling. It must caster in case it touches the ground with sideways motion. Even with these aids, tandem foot launching in nearly still air is more dangerous. And that’s our best time to fly. 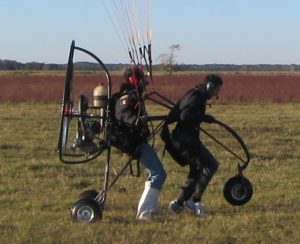 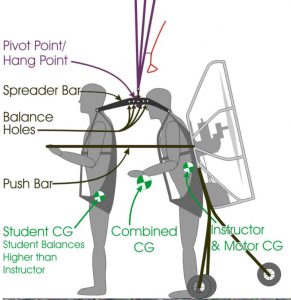 There are many varieties of the typical tandem setup but all incorporate similar aspects. They must do several things.

1. They must separate the student from the instructor and give the wing a place to hang from. Connections should never rely on any single point so, if any part fails, the student and instructor remain hanging and be able to control the craft.

2. Must provide a way for adjusting the hang point so, during takeoff and landing, the student leaves the ground before the instructor. This can be done in several ways but must be able to be fixed sufficiently securely that it cannot move in flight. The illustration shows holes in a cross brace which would obviously be fixed.

3. Provide a way of handling thrust so it does not push awkwardly against the instructor or student.

4. Provide a way of corralling the student during launch. This is typically done with a U-shaped push bar as shown.

5. Consider only giving students only partial control over brakes. For example, an extra set of brake toggles on that operate through bungee material. That way, a panicking student doesn’t have enough authority to cause an accident. At least one serious accident happened when a panicking student pulled the brakes all the way down and held them there until the two pilots crashed.

Once they’ve had a few flights, then replace the bungee add-ons with either normal brake extensions or just hand them the regular toggles.

Our interpretation is: to remain a “foot launch” operation the wheels only support the motor and harness’s weight. The illustration above is one idea. The instructor and student are at least their own weight during the entire launch until wing lift and thrust take their load.

We must collectively operate within the rule lest safe teaching practices are forced back under the less-appealing rock they clawed out from under.